Welcome to the first issue of the SEIU-AAPI Caucus. We are a diverse, talented, hardworking and committed community of organizers and member leaders of Asian and Pacific Islander descent from various Locals and the IU. We believe that our caucus will be an effective instrument not only in highlighting the significant contributions of the AAPI community in SEIU but also in addressing the particular needs and concerns of our community in our common fight for justice and equality. We are on FB and if you are SEIU of AAPI descent, please get in touch with our editorial board so we can add you to our growing mailing list. 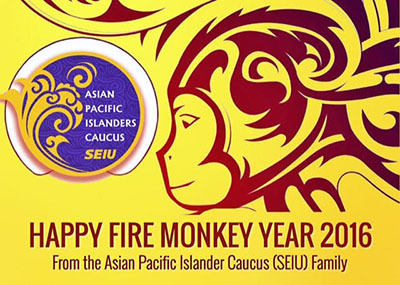 On May 12, a major earthquake hit Nepal at magnitude 7.3, destroying more buildings and homes weakened from the first massive 7.8 magnitude earthquake, which struck northwest of Nepal's capital city Kathmandu on April 25th.

The latest reports indicate that 7,885 deaths and 17,803 injuries have been sustained. Many of the survivors face total loss of their homes and livelihoods, with 284,455 homes destroyed, and another 234,102 reported damaged.

This extensive loss of life and property has been met with an outpouring of support from the international community including global union federations Public Services International and UNI Global Union.

Across our SEIU family Local Unions, the Nurse Alliance, and our AAPI Caucus are in action to support relief efforts. We are in contact with global union federations Public Services International and UNI along with other organizations to obtain more information on how we can contribute to relief efforts and offer assistance needed by our Nepal union families.

The International Union has set up a fund for our Local Unions and members to support relief efforts in Nepal. To contribute, Locals may direct donations by check to:

We have been working with Jigme Ugen, the Executive Vice President of Healthcare Minnesota, who has immediate family and friends directly affected by the earthquake. He shared this with me in the days following the first earthquake:

We have members from Nepal in Minnesota, and I am aware of members from that region in both the East and West coasts of our Union. My immediate family members and friends living in the epicenter of the earthquake have been directly affected. Fortunately, they are all safe. But the same cannot be said of the country. Tens and thousands of people have been affected, and the constant risk of diarrheal diseases, including uncontainable outbreak of cholera is extremely high. The people I talk to in Nepal have assured me that they have not lost their spirit of resilience, and are committed to rebuilding their country. But they need help.

I have been at awe and thankful at how our Union supported the victims of Typhoon Haiyan and the Haiti earthquake. I am appealing for a similar intervention so that an immediate campaign can be launched to help heal and rebuild Nepal.

We are inspired by the courageous spirit of our union members led by our Nepalese brothers and sisters who are not defeated by this tragedy, but instead are looking for ways to restore and rebuild together.

Some 36 AAPI leaders from 14 SEIU locals with a high concentration of AAPI members met April 16 in Los Angeles to re-launch our SEIU AAPI caucus. At the meeting we reaffirmed our commitment to engage our AAPI members on key issues facing our members and communities.

Here are powerful reasons why:

We look forward to building the leadership, expanding the member involvement of our AAPI Caucus, and to growing the movement for social and economic justice.