VICTORY! The Supreme Court just blocked President Trump’s attempt to terminate DACA, the Deferred Action for Childhood Arrivals program, ruling that Trump did not terminate DACA the right way. For now, more than 600,000 DACA recipients may continue to live and work in the United States and not be separated from their families.

This is a huge win for workers and Dreamers across the country who have been living in fear of deportation, including my daughter who has two children who were born here. 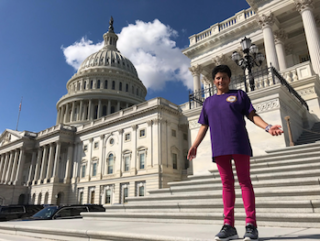 I came to the United States with her 22 years ago, after Hurricane Mitch destroyed our country of Honduras, and was granted Temporary Protected Status.

Now 29 years old, my daughter, who grew up in the United States and considers this country her home, our home, is a DACA recipient. But despite being here since she was 2 years old, and despite now having two children of her own, my grandchildren, she was absolutely at risk of deportation.

Had #SCOTUS ruled otherwise, my grandchildren might have grown up without their mother and me. I am so filled with emotion right now, as I am sure you can imagine.   Ending the DACA program, which permits children who were brought to this country without documentation to apply for deportation protection, would have deported thousands of Dreamers out of the country they grew up in, in the midst of a pandemic to boot.

Not only was it an attack on DACA, it was one of many attempts to take down all immigration programs, to divide us against each other—Black or white, Latino or Asian, native or newcomer. We must elect leaders who will fight with us to protect immigrant families.