Pelosi on home care: ‘This is not incidental to the legislation. This is very, very central.’

“Anyone of us could need this care at any moment. You are one second, one car accident, one wrong move from needing essential workers like us,” said home care worker Lynn Weidner, a leader with SEIU Healthcare Pennsylvania. “When you need us, you want somebody there to take care of you that is also well taken care of… It’s time that we stand up for our home care workers and for our communities of consumers and the elderly.”

With the House and Senate back in session this week and urgently moving ahead on budget and infrastructure priorities, key lawmakers from Congressional leadership threw their weight behind the push to deliver jobs, care and justice for the 2.3 million home care workers in the U.S., and the millions more who depend on their work.

Senate Majority Leader Chuck Schumer said, “Every single day, elderly Americans, sick Americans, disabled Americans rely on home- and community-based workers to live their lives with dignity. [...] They're essential parts of our communities... They've been nothing short of a lifesaving force during COVID [...] For too long, they haven't been treated like heroes and it's creating a crisis in our country.”

“We want to expand the availability of HCBS services so we eliminate wait lists and ensure patients can get the help that they deserve. We want to improve the pay and labor standards to attract the high quality workforce that can meet our nation’s demands. And we want to increase federal funding for these services to a level that will encourage widespread if not universal uptake by the states. As Majority Leader, I’m committed to making sure our reconciliation bill delivers these goals,” Schumer added.

Ralliers, including House Speaker Nancy Pelosi continued to elevate how a massive federal investment in care would not just create more than a million new care jobs, but would provide for workers to have a voice on the job and the ability to come together in a union — a critical measure to deliver justice for the care workforce lead by Black, white, Latina, Asian, indigenous and immigrant women.

“This is not incidental to the legislation. This is very very central. Because it goes to the heart of the matter, that we are about working families in our country and we want not only the people who are caregivers in their home to be able to go to work because they have good care at home, but we want the respect to be there for the workers in the home,” said House Speaker Nancy Pelosi.

“When people talk about the infrastructure bill they say it’s a jobs bill. Well, this is a jobs bill too and it’s a jobs bill that goes to many more women and people of color,” Pelosi added. “It engages more people, adequately compensated, respected for their work, hopefully unionized so that we can do the best possible job for the people, for the children, for America’s working families.”

‘Time to Deliver’ Cry Advocates, Lawmakers
Thursday’s rally anchored a week of action with working people, advocates and supporters across racial, economic, gender and climate justice came together and descended upon Washington. Partners have united across fights for justice to demonstrate how critical care is to every family in every community and to all stages of life. Organizations joining in the coalition’s actions this week included Care Can’t Wait, American Association of People with Disabilities (AAPD), American Society on Aging, Family Values @ Work, Little Lobbyists, National Council on Aging, National Domestic Workers Alliance, National Women’s Law Center, Paid Leave 4 All, Service Employees International Union, and Zero to Three.

Senators and members of Congress responded to their demands Thursday, sharing personal anecdotes and committing to back a bold investment in home- and community-based services and the workers who provide care via reconciliation.

“If we’re paying people $12 an hour, that’s not right for those workers. That’s not right for the care that they're trying to provide everyday. There’s no reason why a worker should have to hold down two or three jobs to provide that heroic care they’re providing every day,” said Sen. Casey, chair of the Senate Committee on Aging and original sponsor of the Better Care, Better Jobs act. “If we’re going to call ourselves the greatest country in the world, we ought to have the best caregiving in the world. The best way to deliver the best care is to care for the worker, lift her up, give her a better wage, invest in her, and allow her to join a union.”

“Home care workers — through it all in the midst of this pandemic, essential workers in the midst of these conditions, none-the-less were there for some of the most vulnerable among us. We want to make sure that work is rewarded. That work receives better pay, better wages, and the better working conditions and we’re not going to rest until we achieve that reality in Washington, D.C.,” said Democratic Conference Leader Rep. Hakeem Jeffries. “We’re going to get this done.”

“We’re playing offense,” said Sen. Ron Wyden. “We know people want care at home, number one! Number two, this is a chance to do it in a way that is less costly than institutional care. Number three, this is a way to bring workers and families together...I'm going to be with you every single step of the way until home- and community-based services is in legislation that heads to the president's desk for his signature.”

Care Advocates Converge All-Around the Capitol
Thursday’s rally anchored a week of action that saw working people and care consumers pull out all the stops to reach members of Congress during a pivotal time. They converged on the streets of Washington, DC, marching Tuesday for action on climate, immigration and care and lit up Capitol Hill saying “CARE CAN’T WAIT.” 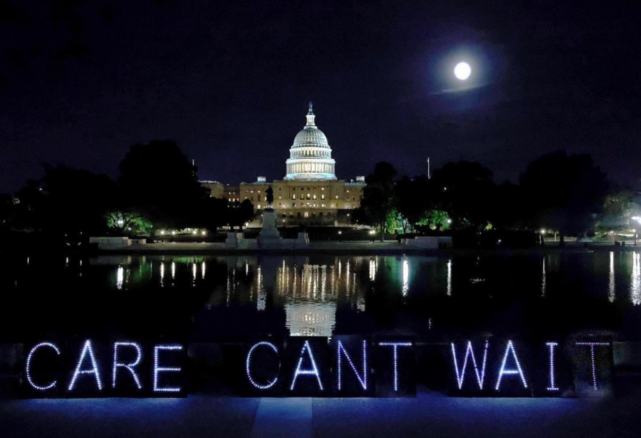 Their messages were visible to staff and members all across the Capitol grounds with a massive “care story walk” between Union Station and Capitol South metro stops where more than 100 floor decal stickers told the stories of a dozen care workers. 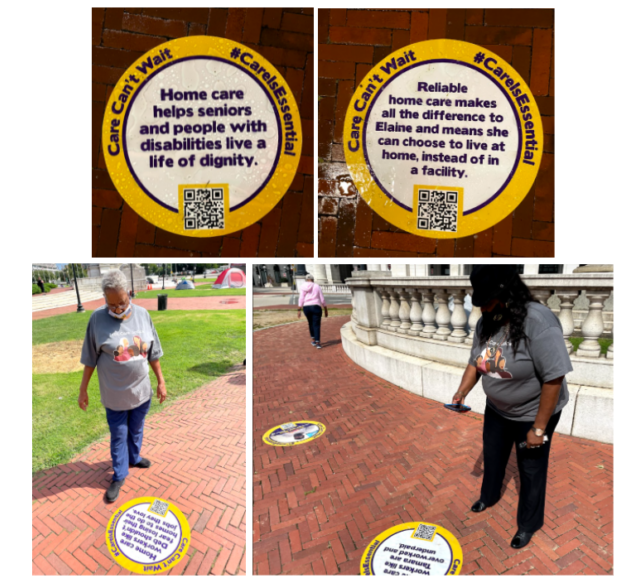 “I put my life on hold to do what I needed to do to care for my mother,” said Deborah McAllister, home care worker in Burgaw, North Carolina. “I don’t get paid — not nothing, not a dime. We don’t qualify for medicaid so I get zero an hour caring for my mother. In North Carolina, home care workers like me, we don’t even have the right to join a union. So I’m fighting for the pay that I deserve because my mother needs me… We deserve to have a voice on the job.”

Polling Demonstrates Widespread, Bipartisan Popularity as Home Care Crisis Escalates
Poll after poll has found a vast majority of voters across party lines supporting the White House’s proposed expansion of home- and community-based services. The latest polling released this week by the SEIU and Hart Research Associates showed 81% of U.S. voters support the home care policies in the BBB plan, as compared to 65% support for the BBB plan as a whole. Even 2020 Trump voters registered strong majority support for home care as part of BBB (64%).

Home care is the nation’s fastest-growing job sector. **The U.S. will need to fill an estimated 4.7 million home care jobs, including over one million new jobs, by 2028.** That’s on top of an already massive shortage of care workers—approximately 20 million Americans currently require long term care—and that number is on the rise.

The home care workforce is composed of 87 percent women and 62 percent people of color. A federal investment in home-and community-based care would serve as the first-ever targeted jobs program for women and women of color—the very workers who have been hardest hit by the economic recession, and who have for far too long been locked out of basic labor rights and protections, as well as economic opportunity, as a result of systemic racism. This plan has the transformative potential to put a majority-women-of-color workforce at the center of our economic recovery and create the union, living-wage jobs of the future.

“We all know that care is essential. Care work makes all other work possible. And a first-of-its-kind federal investment in care is going to pass out of this great Congress and Senate, and it is going to the President’s desk, and it will be signed,” said April Verrett, president of the nation’s largest union of long-term care workers, SEIU Local 2015, and the MC of Thursday’s event. “When you change the lives of caregivers and consumers, you change our country... Together, we stand at the precipice of creating hundreds of thousands of high quality union jobs that will help millions access affordable quality care. Home Care Can’t Wait… racial and gender justice can’t wait… our economy can’t wait… and it’s time to deliver!”

Together, the coalition has invested heavily in a months-long campaign to support care workers, spending over $20 million to push Congress to make a game-changing investment in America’s caregiving infrastructure.

Service Employees International Union
SEIU home care workers in the coalition have come together on tele-town halls attended by tens of thousands of workers, for lobby days with members of Congress, and for local protests, marches, speakouts, car caravans and vigils elevating home care workers' demand that Congress pass a robust package to create a million new care jobs and transform them into good, union jobs that pay at least $15/hour. Workers have met with dozens of Senators and Representatives, published dozens of op-eds, and in July, over 10,000 care workers, consumers, partners and advocates took their demands for a $400 billion federal investment in the care economy to the streets in a nationwide day of action across more than 20 cities.

Earlier this month SEIU launched a $3.5 million investment in TV and digital ads running in the Beltway and 12 states to reach key U.S. Senators and battleground voters, doubling the nation's largest union of long-term care workers’ advertising push to more than $7 million.