"We don't know what will happen in the future."

Far too many workers don't have access to a retirement plan at work.

David Martir is a 35-year-old housekeeper who works two jobs in Los Angeles, one of them in a nursing home. He sees the impact retirement insecurity has on the elderly and saves whatever money he can; however, he still fears retirement. 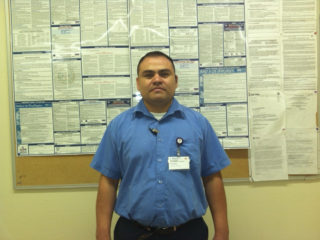 "I'm scared about it because we don't know what will happen in the future. We don't have access to a 401(k) at my job," he says.

"We are not salaried. We just get enough to pay the bills. Most people working in nursing homes have to work two jobs just to provide for their families," Martir says.

Like a growing number of Americans, Martir doesn't expect a lavish retirement but simply wants to spend his later years in dignity.

Martir talks about his ideal retirement: "I would like to have enough money to live, pay my bills and not have to depend on anyone. I don't want to have to rely on the government because they don't give you enough money."

He doesn't know what the future holds but he finds comfort in knowing there is an option for Californians who don't receive a retirement plan at work. In 2012, due in part to efforts of SEIU members, California Gov. Jerry Brown signed into law a bill to create the California Secure Choice Retirement Savings Plan. The new hybrid savings plan would act as a supplement to Social Security and build on positive attributes of traditional pensions and defined contribution plans.

Are you worried about whether you'll be able to retire or how you'll make ends meet when you do? Do you have an example of how the retirement security crisis is affecting your family, co-workers or neighbors? Share your story!