Hundreds gathered in DCA yesterday, but it wasn’t for what you think.

Workers are in the #FightFor15 from around the world.

Yesterday I joined my brothers and sisters around the world at Ronald Reagan national airport in the demand for higher wages, better trainings and working conditions for airport workers. I got involved with the union and Fight for 15 because I saw the imbalance of power that is hurting people. 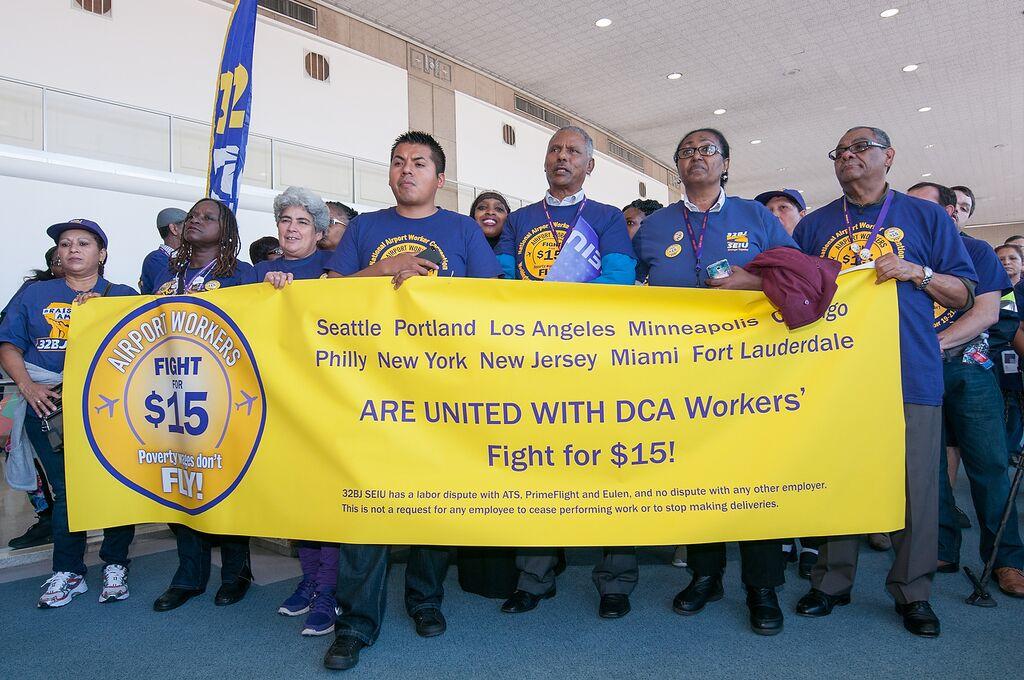 As a cabin cleaner at San Francisco International Airport, I am proud to say that because we have a union, we have some of the highest working standards in the country, but I know there are many more who don’t and need our support. Folks like Ababuti Ogalla, a wheelchair assistant at Boston Logan Airport. Like many, he is an immigrant who came to America to build a decent life for his family.

“I started working at Boston Logan in 2011, but I quickly realized that with two kids and a wife to support, my pay doesn’t even cover my rent and bills. That’s not the America I believed in. Now I work two jobs, barely have any time to spend with my family, and still struggle to make ends meet.”

Ababuti is right. That’s not the America any of us believe in. We continue to fight because we know we can raise the minimum wage and support the ones we love with dignity and respect.

Too many airport workers are paid minimum wage or less and that’s not right. We take pride in our jobs and play a key role in helping more than 393 million passengers yearly enjoy a safe and secure travel experience. But without health insurance or sick days, we risk losing our jobs every time we are sick or have a family emergency. It doesn’t make sense; America spends billions annually on airport security, yet the very people charged with implementing security measures are paid poverty wages.

The rally at Ronald Reagan Washington National Airport was just one of a series of events this week. We hosted our first ever National Airport Worker Convention, where we developed a national strategy to win $15 and union rights for all airport workers. We then took to Congress to urge our representatives to seek a federal solution to the problems faced by contracted out workers at our nation’s airports. Many pledged their support to our fight, knowing that both, $15 and union rights, will ensure better standards for workers and passengers.

By marching, protesting, and striking at airports across the U.S., already 45,000 airport workers have won wage increases and critical improvements including healthcare and paid sick leave. But there is still so much more to do. And despite all of us coming from different parts of the country and world -- the United States, Europe and Australia - we all left the convention committed to one fight and one collective voice.

I am excited to see the positive changes we’re going to bring to airport workers.

Check out some of our most memorable moments below.