In one of the biggest victories for working people in Pennsylvania this year, 1,000 Pittsburgh security officers won their first-ever union contract with nine security companies.

After the officers won citywide training legislation earlier this year, they have now won a partnership to implement the training requirements. The officers also won quality healthcare and wage increases that will help sustain their families and communities.

“I’m proud to be part of the effort to improve the lives of 1,000 security officers in the city and their families,” said Sherri Geyer, a native Pittsburgher with 18 years’ experience in the security industry. “Our success will improve the quality of life and the profession itself.”

Pittsburgh security officers are the latest property service workers in the city to join 32BJ SEIU, following suburban janitors’ successful effort to unite with downtown cleaners in the early 2000s.

“For the first time, we’re able to see where the wealth of a changing economy is able to help all people,” said Mayor Peduto. “We are literally rebuilding the middle class.” 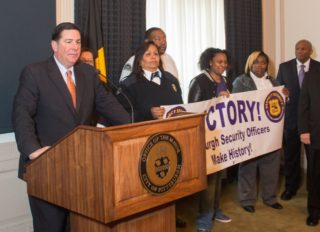