Read our lips: Americans want to expand Social Security - not to raise the retirement age

Raising the retirement age would hurt Americans who live paycheck to paycheck. 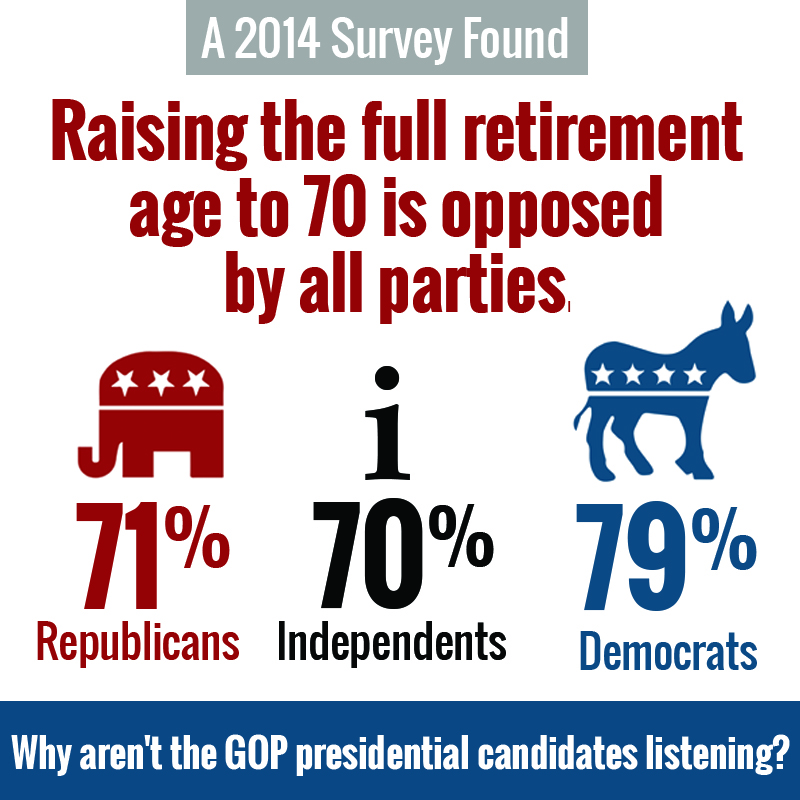 The recent presidential debates reminds us that Democrats and Republicans are polar opposites when it comes to Social Security.

While many of the Democratic candidates want to bolster the program and increase benefits, GOP candidates Chris Christie, Ben Carson, Jeb Bush and Marco Rubio have all called for cutting Social Security’s modest benefits by raising the retirement age.


Raising the retirement age may not be a big deal for the wealthy Americans who finance political campaigns or even politicians proposing these cuts. However, it would have a devastating impact on Americans who live paycheck to paycheck, including Patricia Walker of Tampa, Fla.

“For me as a home care worker, I couldn’t work until 70. I already have problems with my knees. I’m already trying to make it,” says Walker, who’s in her early 50s.

Although she works long hours, Walker’s low wages prevent her from being able to purchase a car let alone save money for her golden years. Social Security will be her only plan for retirement.

This is a Social Security cut Republican presidential contenders seemingly want to avoid discussing while on the campaign trail.

These same candidates also seem to be ignoring the voices of voters who want lawmakers to expand Social Security; not cut its already modest benefits.

Republicans calling for raising the retirement age may be willing to ignore the fact that income levels and life-expectancy rates remain stagnant for the poor as well as the needs of nurses, home care providers, construction workers and others with strenuous jobs that would suffer under their proposal.

One thing any presidential candidate can’t ignore is the retirement crisis looming over the United States. Our country’s next president must be willing to put ideology aside and focus on policies to deliver retirement security to more workers. That includes increasing Social Security benefits, especially for low- and middle-income workers.