Faculty and students have voiced their support for the legislation 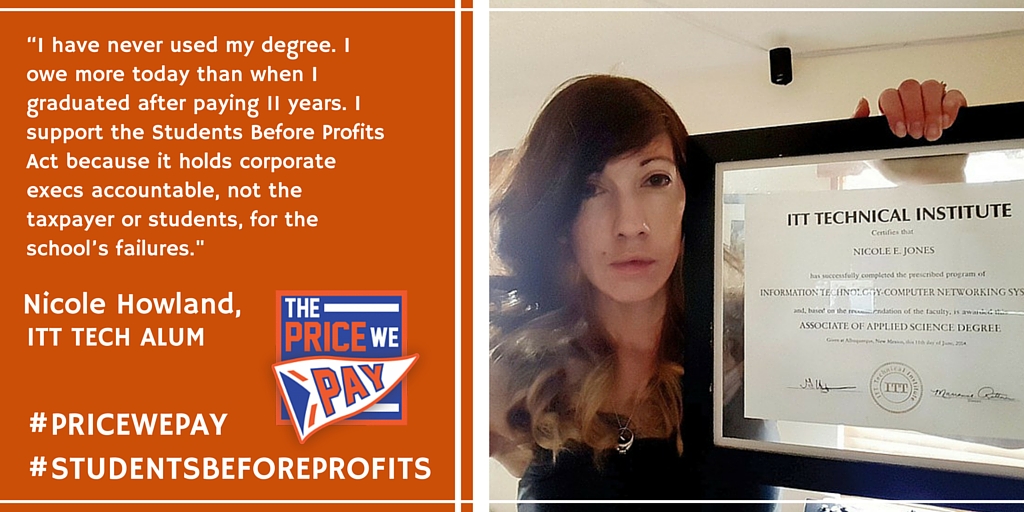 Students and faculty across the country are applauding the Senators for sending the important signal to the for-profit industry that students should be the priority, not profits.

Kevilina Kay Burbank said, "As a former Heald College faculty member, I support the Students Before Profits Act and believe that institutions that deceive students should be held accountable. I've seen the crisis in higher education play out and appreciate the Senators’ work to protect students from schemes that ultimately leave them in debt, and often without a degree. Ultimately, we need to make sure for-profit colleges invest at least half of students' money on instruction; they need to prioritize students over profit."

The Students Before Profits Act of 2015 would make executives more responsible for the closure of for-profit colleges so that taxpayers and students aren’t stuck with the bill.

Nicole Howland is an alumna of ITT Tech. She said “I have never used my degree. I owe more today than when I graduated after paying 11 years. I support the Students Before Profits Act because it holds corporate execs accountable, not the taxpayer or students, for the school’s failures.”

A 2012 report showed that thirty for-profit higher education companies spent more on marketing and recruitment than they did on instruction.

Building on the successes of faculty who have formed unions and created a new level of activism on college campuses, the Faculty Forward Network is working to improve faculty working conditions and student outcomes.

Mary Kay Henry, president of the Service Employees International Union said, “When a for-profit college closes, students shouldn’t be set out at the doorstep while company CEOs get rich. Over the past few years, faculty and students have united with other workers to demand a change and higher standards in higher education. SEIU supports Faculty Forward Network’s efforts to nationally coordinate direct policy action.”