"...so much to be done through our unions, bc the economy is out of control."

U.S. Army veteran Troy Williams is in a new kind of battle zone—as a security officer serving New York City’s financial industry. “I contribute to their mental health with a hello or a goodbye to clients who spend up to 18 hours a day at work,” he says. “They are mostly bankers, and you can tell that they appreciate me being courteous.” 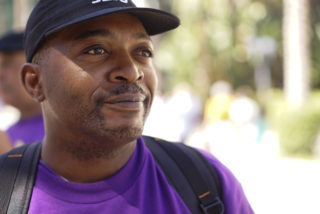 Troy enjoys the fast-paced environment. “It requires focus and attention to detail. I like the respect I get from the clients.”

This focus and respect with clients paid off when his building faced a blackout. With the loss of electrical power, Troy says, “I had to keep people composed, report everything accurately and implement a plan of action.”

Working to build his union, 32BJ SEIU, Troy and his fellow officers have advanced their capacity to handle emergencies even more. “We gained additional training, including counterterrorism, emergency response, CPR, AED and First Aid,” he says. “It makes you a better security officer.”

Building the union has also improved Troy’s standard of living. With 18 years in the security industry, Troy has seen his pay increase from $8 to $18 per hour, and now has guaranteed raises each year. Troy is especially grateful to have won paid vacation, personal days and sick days.

He and his fellow security officers are gearing up to take a stand for higher wages in 2016.

“We can still achieve more! The Fight for $15 is a good start. There is so much to be done through our unions, because the economy is out of control. Our unions fight for a better way of life for everyone. As a group, we have the power to raise America.”