Edward can now visit his family on the East Coast.

Edward Wright still uses the skills he gained in the six years he spent in the U.S. Army, even though he completed his service in 1967. He says it’s these skills that make veterans such good security officers, and that they are good at following orders. More importantly, Edward sees veterans as key leaders in the push to improve the quality of security jobs, due to their experience working as a team. “Our whole military career is in a group, with leaders in every rank,” he says.

Edward is a leader in his union, SEIU United Service Workers West, which was so successful in improving Los Angeles security positions that his employer cut its turnover rate in half in the first four years of their union contract. 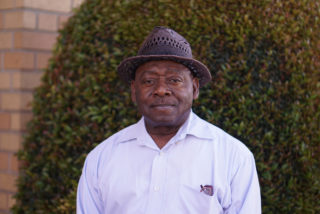 “We won better training through our union, which gives us a higher level of professionalism and we feel better about ourselves and the service we’re providing.”

In the nine years that Edward has worked as a security officer, he’s seen his wages rise by nearly 50 percent, from $9 to $13.05. “It means a lot to see those increases,” he says.

Yet the best part of organizing his union has been winning paid time off.

“My mom is in a retirement home near L.A., and I spend time with her whenever I can. We don’t want to move her, since she knows everyone here. But the rest of my family is on the East Coast. Having two weeks of paid vacation means I can visit them more often.”

Edward recognizes that these gains were only possible because he worked together with his fellow security officers—including many veterans—to organize. In the end, their organization benefited the employer and the client, as well, since they were able to keep experienced officers on the job.

Now Edward and his co-workers have joined the Fight for $15 and union rights. “I’m glad to be a part of it. Too many hard-working families have trouble making ends meet. Everyone deserves a chance to improve their lives.”