Veteran Security Officer Jeremy Birchwood on the Fight for $15

Elevating somebody else helps my community as a whole.

After serving ten years in the U.S. Army, Jeremy Birchwood came home to New York with his two sons. He was surprised that he had trouble finding work in the civilian environment.

“I was a single father. I had responsibility for my two sons, who looked up to me. I wanted to set an example for them like my mom did for me.” 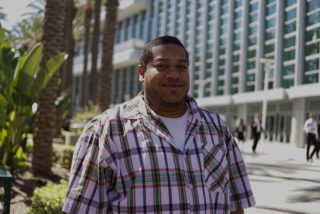 Jeremy eventually found work as a security officer—where he has served the public for ten years. He is an armed Federal Protection Officer and a member of 32BJ SEIU. His own difficult transition helped him understand the value of his union’s Veteran Transition Assistance committee and the other gains he’s won by organizing his workplace.

“As a soldier, it’s always about the person next to you, and what you can do for them. You gotta watch everyone’s six -- a term we used in the service. If I can help elevate somebody else, that helps my community as a whole.”

Jeremy was proud to send his oldest son to college this year, and wants all working people to have the same opportunity. He is helping organize his union to improve conditions for his fellow security officers—who are gearing up to take a stand for higher wages in 2016.

The son of Honduran and Trinidadian immigrants, Jeremy sees his mother’s struggle in the Fight for $15. She worked three jobs to support him and his sister.

Jeremy also worked in fast food for a few years as a second job while he was not on military duty. “I know what it’s like to work in the fast food world, to work for very low wages.”

“Some people may say that workers in the fast food industry don’t deserve $15, and I’m saying why not? Every person deserves a living wage.”