In the state found to have the worst economic disparities in the country, security officers and janitors are leading the charge to rebalance the economy. Members of SEIU Local 26, who are mostly people of color, marched through Minneapolis’s extensive downtown skyway system. The march was part of a larger people’s agenda to take control of the state’s economy and put resources into local communities. 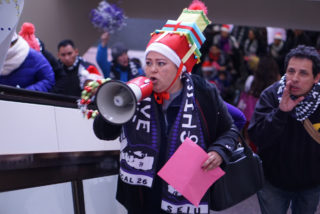 “We are fighting not only for our own families, but to help move our region and state in the right direction,” said Security officer James Matias, a member of his union’s Executive Board.

“We found that raising wages to $15 for all janitors and security officers would lead to over $30 million of economic activity each year being pumped into our communities. Local 26 members are overwhelmingly people of color, which means that money would be going back into areas that have been left behind by our economy for far too long.”

Security officers and janitors, united in SEIU Local 26, plan to show Minnesota that if we stand together and fight, we can Reclaim our Dreams.

See more from the Star Tribune, Workday Minnesota and ABC.