I joined the fight to stop voter discrimination.

Traveling to North Carolina to March for Voting Rights. 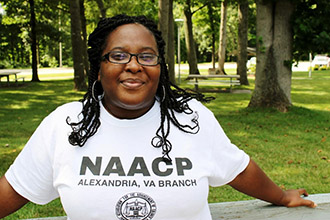 Yesterday, along with dozens of fellow members of SEIU Local 512 in Virginia, I got on a bus to travel to Raleigh-Durham, North Carolina to march in solidarity with my union brothers and sisters, as well as activists from the NAACP and countless groups from around the country, to give voice to those who have been disenfranchised by voter suppression efforts in North Carolina and across the country.

No matter what the U.S. Supreme Court may say, voter discrimination based on race is not a thing of the past--it is a reality that persists today.

We saw many efforts to disenfranchise African American and Latino voters in the 2012 election.

These voter suppression laws, like mandatory photo identification, are part of a concerted, strategic effort to silence the voices of communities that have historically been left out of the voting process - communities of color, low-income voters, young people and the elderly.

This will only get worse if we do not fix the Voting Rights Act which the U.S. Supreme Court gutted last year.

I also came to North Carolina thinking of those brave activists who came before me in the struggle for equal rights for all Americans under the law. By marching and raising our voices in support of this cause, we are honoring them and their legacy.

Like them, we won't stop until every American can vote without facing discrimination.