Nobody cares about burger-flippers? Fast food workers fought for $15 in NY and won. 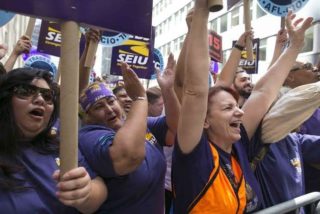 When courageous fast food workers first started the Fight for $15 two and a half years ago, nobody thought they had a chance to win. Yesterday, the skeptics were proven wrong. I've never been more drained, exhilarated, and proud all at once. While I'm still trying to fully grasp the significance of yesterday's milestone in our movement building, I'm in awe of what we can accomplish when we stick together.

This historic action by Governor Cuomo's Wage Board will transform the lives of fast food workers and their families across the state. Workers will have more money in their pockets, which they will spend in their communities, in hardware stores and supermarkets.

One fast food leader said that he didn't think the Wage Board would listen - or care about fast food workers. He said, "We are nothing more than the gum on the bottom their shoes. Nobody cares about burger flippers." He said the Wage Board action made him realize that his work has value. "This is the first time in my life I fought for what I believe in and I learned the fight pays off," he said.

I grew up in a family of 10 that taught me that you could make anything happen when the group moved together. Fast Food workers reminded me of this lesson.

For fast food workers like Flavia Cabral, this action means being able to make ends meet at the end of the month and being able to provide for her two daughters. After the decision she talked her way through the Governor's security detail to tell me that her daughter was so happy she won this step. She's happy about this victory because now she won't struggle like her mother did, and maybe even can go to college. We took a selfie together, so she could show her daughter that the victory was real. While Flavia celebrated this big step forward, she is keeping her eye on the ball. "We won $15, but I know that I need to be in a union with all the McDonald's workers--that's the only way I know that I'll be able to make a better life for my girls."

It's stories like Flavia's and those like her who keep this fight going. This victory is a sheer testament to the power of unity and resilience. The global leaders in the Fight for $15 movement are demonstrating what I learned as the eldest of 10 siblings -- that we are our brothers and sisters' keepers - and when we unite we win more than wages, we win respect and we continue the fight until we win recognition of our family, our union.

We thank Governor Cuomo for his leadership and the Wage Board for its diligent work, listening to the facts and the voices of fast food workers and their families.

This historic victory will inspire underpaid workers all across the nation to stand up and unite for $15 and a union. Every elected leader in America should now feel the pressure to follow Governor Cuomo's lead and take action to raise wages for working people.

As we celebrate a major victory for working people, we must remember the millions of hard working people who still cannot provide for their families. We believe that home care providers, airport workers, child care teachers and many more will be inspired by the fast food workers' victory. We believe that every job can be a good job that supports our communities and the ones we love. And most of all, we know that when we unite, we win.