One of the last speeches he gave before he was killed. 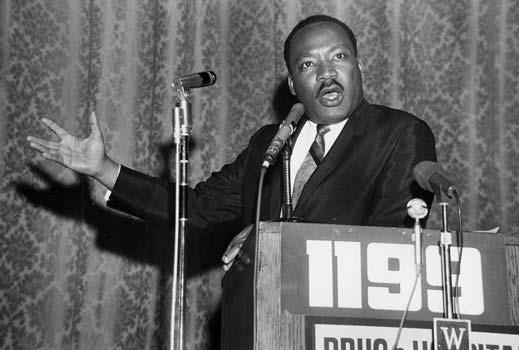 SEIU members have provided a voice for the voiceless for ninety years. From our beginnings as one of the country's first racially integrated unions to our historic support for marriage equality in 2004 to our work to win justice for immigrants, SEIU has a long history of standing up and speaking out for equality.

SEIU's history as a force for civil rights began with its founding as one of the first integrated unions. African Americans held leadership roles such as Vice President from the very beginning and AFL founder Sam Gompers even called the janitors union "too diverse." SEIU's leadership on civil rights continued as SEIU President David Sullivan marched with Martin Luther King, Jr. from Selma to Montgomery in 1965 despite the refusal of the AFL-CIO to endorse King's march on Washington.

SEIU 1199 Healthcare Workers East has an especially a proud history of civil rights activism--Dr. Martin Luther King Jr. called it "his favorite union" and he considered himself "a fellow 1199-er." King suggested to 1199 "that if all of labor would emulate what you have been doing over the years, our nation would be closer to victory in the fight to eliminate poverty and injustice."