After walking 100 miles, they hoped their last steps would shake the Capitol.

As the pope reached Washington, participants in 100 Women, 100 Miles did too.

Participants in the 100 Women, 100 Miles march completed the last few miles of their journey Tuesday as they wove through Northeast Washington, D.C., from the Basilica of the National Shrine of the Immaculate Conception to the McPherson Square downtown park. The women aimed to draw attention to the need for comprehensive immigration reform that would bring 11 million undocumented immigrants out of the shadows so they might fully participate in our society and our economy.

The trip had begun a week earlier in York, Pa., at a federal immigrant detention center -- a symbol and reminder of why they were walking. As Ai-Jen Poo, head of the National Domestic Worker Alliance, put it in an essay for Time: 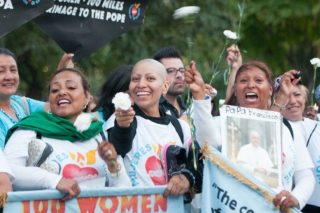 "(We walk) to welcome Pope Francis during his first visit to the U.S. and to echo his message of compassion, global cooperation and welcoming of migrants. His vision, based on that of one of the most important leaders of all time, Jesus Christ, is one of universal love, where no one must live in the shadows, and everyone has dignity."

Among those who joined the women for the final miles: 16 Pilgrims, working people from all over the country, who themselves had just reached Washington in time for the papal visit.

"We're sharing our solidarity and strengthening the power of the march," said Pilgrim Adriana Alvarez, a McDonald's worker and Fight for $15 activist from Illinois.

"I understand what the 100 Women march stands for, and to help with their cause, I wanted to join them," added Pilgrim Maria Theresa Diaz, a registered nurse and SEIU Local 1107 member from Nevada.

The evening, and the very long walk, concluded with a prayer vigil. Attention Wednesday turns to hearing from Pope Francis himself -- as well as taking the call for commonsense immigration reform straight to Congress. The Pilgrims and others will visit the offices of all five U.S. senators running for president to deliver a unity statement signed by more than 200 organizations. It reads, in part, 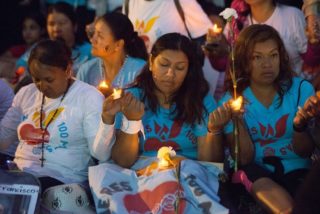 Like many people of faith around the world, we have been inspired by the Pope’ s message of recognition and call for justice and dignity for all people, including immigrants....

We pray that the historic encounter between Pope Francis and the Congress may lead to the beginning of an honest debate of how to fix this broken immigration system in a way that is consistent with the moral principles of all faith traditions to treat immigrants with the dignity they deserve.

We also urge our community to commit to becoming full and active participants in the civic life of our country by becoming citizens, exercising their right to vote, and becoming advocates for full civic engagement by members of their communities.