Pope Francis has made climate change a signature issue for the Roman Catholic Church and his papacy, and in his address to Congress, he explained that the issue could no longer be ignored, nor could it be separated from other concerns of working people.

"Now is the time for courageous actions and strategies, aimed at implementing a culture of care and an integrated approach to combating poverty, restoring dignity to the excluded, and at the same time protecting nature," he told lawmakers. 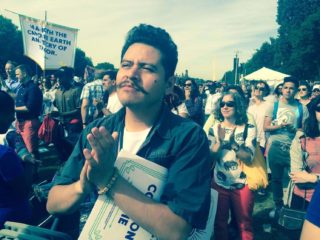 As the pope spoke inside the U.S. Capitol, tens of thousands waited outside for a chance to hear him, and many in that crowd joined a rally on climate change that underscored why it matters so much.

"Let us heed the call to commit, collaborate and fight together for a safer, cleaner and more just society, as called by Pope Francis!" urged social justice leader and former SEIU International Secretary-Treasurer Eliseo Medina. 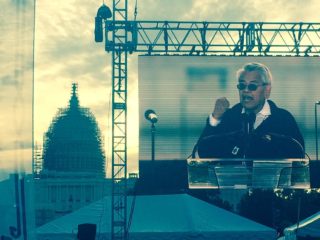 "The Pope made the climate change fight global," said Dina Lopez, a home care provider and member of SEIU Local 2015 from Lancaster, Calif.

Pope Francis heads next to New York City, where supporters of climate change action will be rallying as well. Members of 32BJ SEIU and 1199SEIU United Healthcare Workers East will be among thousands a Thursday night event called "Under One Sky," where New York Mayor BIll de Blasio is expected to declare Friday "Global Goals Day" to draw attention to the worldwide push to curb emissions and a key papal advisor will address the crowd in support of the effort.

Kenya Moses, a single mother and McDonald's worker from Brooklyn who is active in the Fight for $15, will speak.