Let us heed the pope's call to action

Standing together, we can do what it takes to make the impossible possible.

Before Pope Francis arrived in Washington, I wrote that I hoped his presence and message would be beacons of faith and hope to illuminate a path toward overcoming the painful divides in our economy, our society, and our civil discourse.

We still have much to hear from this pontiff as he travels to New York and Philadelphia. But so far, I am moved, encouraged and very, very grateful. 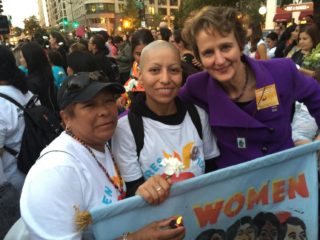 Obviously, the words and deeds of the pope have been uplifting and stimulating. I will never forget how the very first words he said to all of us on American soil were, "As the son of an immigrant family, I am happy to be in this country, which was largely built by such families." What a bold way to link himself and his faith to the human stories that illustrate the need for commonsense immigration reform.

And his address to Congress contained this powerful call: "Now is the time for courageous actions and strategies, aimed at implementing a culture of care and an integrated approach to combating poverty, restoring dignity to the excluded, and at the same time protecting nature." Of course, he is right. We must be moved to stand for the "least of these," and we cannot separate out climate change while we are doing it. The people who make our laws needed to hear these words.

The light from this experience, though, also shone from the hundreds of thousands of people the pope inspired to come to Washington. 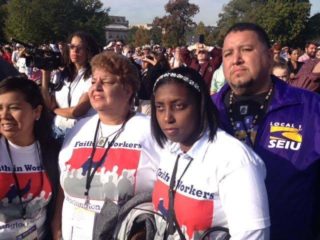 I can explain this best through the stories of our 16 Pilgrims, the SEIU members and Fight for $15 leaders who came to the nation's capital to link arms, join voices and speak up for immigrant families and all working men and women. They rallied for climate action. They marched in solidarity with immigrant families. They broke bread, laughed, prayed and embraced.

"When the pope said he came from a family of immigrants, I felt a real connection," said Julian Long, an adjunct professor from St. Louis.

He gave us "a strong message of hope," added Mariacarmen Macias, a child care worker and member of SEIU Healthcare Illinois.

"I hope that his words touched the hearts of everyone," added Felipe Arellano, a janitor and member of SEIU Local 1 from Chicago. 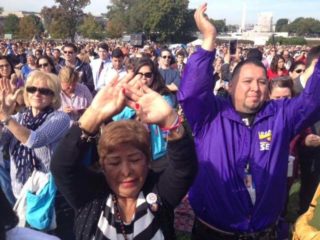 Let me express my thanks to two groups in particular. First, thank you to the thousands of working men and women, as well as volunteers, who could be seen all week in Washington doing what needed to be done to accommodate the papal visit. At the Capitol, I talked to an officer who was in the middle of a 20-hour shift. A woman named Bernita at the Capitol Visitor Center touched my arm so I could carry her spirit and love into the gallery to hear Pope Francis speak. At Catholic University, I saw students and others hustle to aid and direct crowds of thousands. A It was a remarkable, historic endeavor.

And I must extend my deepest appreciation and thanks to all of this nation's 64 million service workers -- including the 2 million men and women of the Service Employees International Union -- who work hard to earn their "daily bread." Along with our Pilgrims, I did my best to represent you at numerous events with dignitaries, elected officials, faith and justice advocates and others this week. I carried our mission for a just society with me. It was, I say most sincerely, the privilege of a lifetime to speak for you in this incredible moment.