Pope Francis introduced himself to America as 'the son of an immigrant family.'

Our Pilgrims cheered his remarks on immigration and climate change.

It only took one sentence from Pope Francis to know whether he would carry forward in the United States the messages of justice that have largely defined his tenure as the leader of the world's more than 1 billion Catholics.

"As the son of an immigrant family, I am happy to be in this country, which was largely built by such families," he said in opening his remarks at a welcoming event on the White House West Lawn. 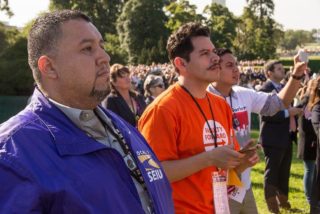 The significance of the pope's decision to introduce himself to Americans that way was not lost on the 11,000 people who admitted to the formal ceremony, including our Pilgrims.

"A strong message of hope that I can take to Chicago" is how Mariacarmen Macias, a child care worker and SEIU member with SEIU Healthcare Illinois, characterized the remarks.

The pope also talked about the environment in his remarks, which could be seen as a preview of his address to Congress Thursday. "Climate change is a problem that can no longer be left to a future generation," he said.

The Pilgrims took in the once-in-a-lifetime experience. "It makes me... emotional, because I have kids and know immigrant people here, struggling to take care of their family and trying to make ends meet," said Antoinette Quintyne, a member of 1199SEIU. "We should all come together as one and fight." 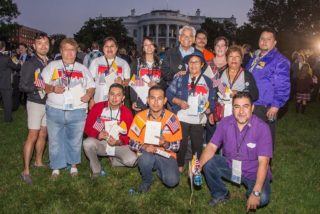 "I was struck by the shared vision of the future by the president and Pope Francis," said SEIU President Mary Kay Henry. "They both expressed such hopefulness that we can change the world."

Following the White House ceremony, tens of thousands of people lined a parade route to see the pope, who would later meet privately with President Obama and celebrate Mass at the Basilica of the National Shrine of the Immaculate Conception.

Meanwhile, the Pilgrims headed to Capitol Hill, where they talked about the need for immigration reform with the offices of Sens. Ted Cruz (R-Texas), Lindsey Graham (R-S.C.), Rand Paul (R-Ky.) and Marco Rubio (R-Fla.).