Thousands of SEIU janitors are traveling to the City of Brotherly Love today to hold a massive rally in support of nearly 75,000 east coast janitors who are negotiating fair wages and benefits this fall. Across the country, thousands more are stickering up in their worksites and marching in the streets to fight for $15 and to #RaiseAmerica with good jobs.

This rally is the latest escalation in a nationwide movement to raise our communities by standing together for good jobs.

Already this year, janitors have won historic wage and job improvement increases. In March 2015, thousands stood in solidarity with Chicago and Cleveland, as they negotiated their contract, and in June we rallied again in solidarity with Detroit and Washington D.C.

More than 50% of janitors with new contracts will make more than $15 an hour by the end of this next contract. And each city has won important additional standards, like increased sick days, full-timing of work, strong non-discrimination language, and protecting employer-paid healthcare.

And we’re not done yet. 130,000 members are standing strong for our east coast brothers and sisters today. In 2016, we’re taking the fight back out West – to Minnesota and LA, Houston, Seattle and Denver. And we’re supporting our brothers and sisters in airports, security, industrial laundry, home care, child care, and in fast food.

We fight because we know our country can do better. We fight because the communities we live in are still fighting for $15 and the right to form a union. We’ve won for working people before, and we will win again. We will keep fighting until every working person in America has $15 and union rights. 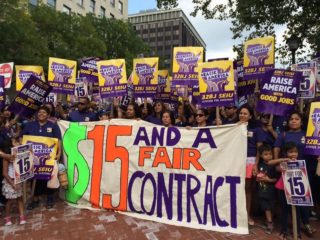