Everyone Should Be Able to Succeed

Members of our union gathered in Washington, D.C., on Sunday to prepare for today’s Supreme Court arguments in the Friedrichs v. California Teachers Association case. This case threatens the fundamental promise of America: that everyone should be able to succeed.

What struck me while talking with these members was their pride in how far we’ve come as working people—the gains we’ve made in various parts of the country. 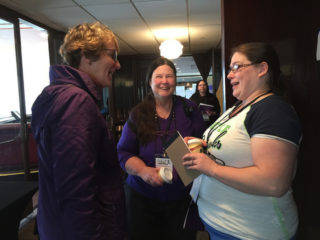 That pride is steeled with an understanding of the stakes and the forces we will face together. We know that we face the same wealthy special interests that are attacking voting rights, dismantling our public schools, and attacking our unions in legislatures and courts. These are the same wealthy special interests that see the increasing economic divide between themselves and working people and nod approvingly.

Members from SEIU locals 73 in Illinois, 925 in Washington, and 1984 in New Hampshire told me they’re connecting the dots among all these forces that see an economy out of whack—and are working to further rig the rules in their favor. However, they are fighting back.

The fast-food Fight for $15 has inspired new aspirations and new fight—and 11 million people across this country have seen their wages rise as a result. That fight has demonstrated to people that when we unite we can make change, even if the deck is stacked against us.

In Virginia and Washington, home care workers are stronger than ever and are helping to lead a movement in the Home Care Fight for $15. They are the heroes who have withstood attacks and are helping us form a union for the 21st century. They are showing us the way forward.

We are in the midst of dramatic change in our union—we’re becoming the movement for the whole family exemplified by college faculty and child care workers who are organizing not just to raise up their very precarious professions, but to raise up affordable education for both young adults and tiny children. Our new union movement will be the fight for families. Our new union movement will take the best of what we’ve been—without the parts that haven’t worked well.

Here, today, in Washington, D.C., we’ve made a commitment to each other that we will lead in this transformation. We will keep taking action in the streets and in our workplaces to stand up for jobs that give everyone a fair shot at a secure future. We are building a movement to change America.