54 years after my first day at DCA

We’re making history at our airports

When I started as a belt man in 1962, I was paid $1.75 an hour. That would be almost $14 an hour today. We also had healthcare, paid sick leave and paid vacation time. 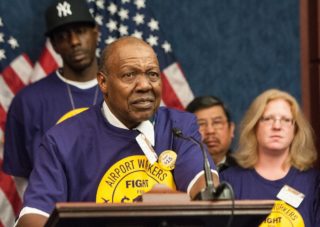 We were part of a union.

Then in the 1980s things got really hard. Everything changed under President Reagan. We started working for contractors and every new contractor that came into the airport lowered our working standards further.

While passengers were flying forward, airport workers like me were going backwards.

I reflect back on what we used to have and I tell those who haven’t been at National Airport as long as I have that being in a union will be the best thing to happen to us.

Standing together we can change our lives and the lives of others. I am not doing this for myself, I'm doing it for those coming up behind me.

What we are doing at our airports is part of history.

On Martin Luther King Day, we marched to his memorial in D.C. It reminded me of the civil rights era and the sanitation workers. They weren't asking a lot and neither are we. Our union will give us a voice again, raise our working standards and give us back our dignity on the job.

I have a wonderful wife, seven grown kids, too many grand kids to count and four lovely great-grand kids.

It is for these generations that I fight to win recognition of our union and $15 an hour.