We stuck together and won big at Fort Lauderdale Airport

On the picket line, my fear disappeared

When I started working as a janitor at Fort Lauderdale airport two years ago, I was paid $8.05 an hour. I have two young kids and we were all forced to live with my mother. 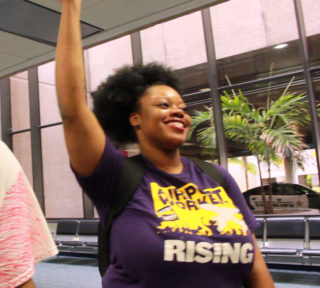 After just one week on the job, I went out on strike.

I was afraid. But I knew it was the right thing to do. I would do anything for my children.

On the picket line, my fear disappeared. It felt good to be fighting for the right cause.

I knew our jobs had to change.

After the strike, a lot of the more experienced workers—including many immigrant workers—came up and asked me about the campaign. I educated them and encouraged them.

Our next strike was even bigger.

Then we won big raises. I am now paid $13.88 an hour, almost $6 an hour more than before. Our protests and strikes made it happen.

We are still fighting for our union with 32BJ SEIU but, with the raise, my life has changed in many ways. The biggest is that we moved out of my mom’s house. Now we have our own apartment.

My son always used to say, “I’m going to grandma’s house.” Now it feels so good to hear him say “I'm going to mom's house."

It makes me proud to know we are making these changes together.