Gerald says people would be healthier, wouldn't move so fast if they met their needs with just one job.

Gerald Walker loves protecting people. “I like making people feel safe, we’re giving a service and I have pride in what I do,” he says. “People who meet me remember me.” Indeed, the charismatic personal trainer has a striking presence. “I treat people the way I’d like to be treated.”

Yet Gerald feels a lack of respect from his employer, who pays him only $11 an hour, despite more than six years’ experience in the security industry. 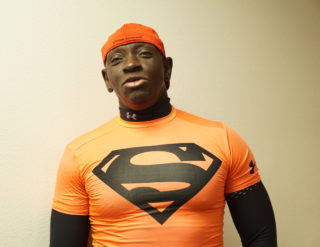 Gerald works full time as a security officer, and almost as many hours as a personal trainer. He’s also passionate about teaching healthy living. All told, he averages 76 hours a week.

Even so, the 54-year-old doesn’t have the kind of economic security he’d like. He hopes to afford to live on his own someday, but is still sharing an apartment.

“All of us are a paycheck or two from being out in the street,” he says. “Right now, you feel like you’re slowly sinking. You’re in quicksand.”

Healthcare worries Gerald, whose motto is “my health is my wealth.” He can’t afford to buy his company’s health insurance. “It costs too much coming out of my pocket. My former employer used to pay for part of it, because it’s a good investment for the company, to have us healthy. I’m looking into California’s public coverage but don’t have anything yet.”

He also struggles with the lack of paid vacation. “When I go home to visit my family in Chicago, I have to put money away. Besides just the plane ticket, I have to make up for losing five days’s pay.”

Now Gerald is taking steps to improve his company by organizing a union with his coworkers. “We need a voice to protect ourselves, and people who feel like they don’t have the power.”

Gerald sees higher wages and strong organizations as key to improving what’s nearest to his heart: our health. “People would slow down. They wouldn’t have to move so fast if they didn’t have to work more than one job to meet their needs. Stress levels would go down, and everyone’s health would be better.”