First responders, working to keep the city safe, but barely scraping by 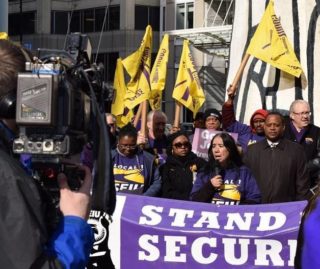 “Security officers like me help keep our citysafe, and we’re coming together for a better Chicago," said Lena Frazier, SEIU Local 1 security officer. "We're standing up for a brighter and safer future for our families and our communities."

Security officers who secure downtown buildings such as the Willis Tower, the John Hancock Center, and the Chicago Board of Trade are the first responders in the increasingly dangerous city of Chicago. While they put their lives on the line every day to keep the public safe, they barely make ends meet.

Chicago’s high gun murder rate is directly related to its racialized income and wealth inequality. Improving service jobs, such as security jobs, is a direct route toward improving conditions in our neighborhoods and lowering the city’s homicide rate. The downtown security officers’ union contract expires on April 21st.

“If you work hard, you should be able to provide for your family, save for retirement, and make sure your children have the opportunity to get ahead, but that's not the reality for many security officers here in Chicago,” said Chicago Black Caucus Chair Roderick T. Sawyer. “A living wage for security officers will make our economy stronger, our neighborhoods safer, and our city a better place for everyone.”