When the plane landed in the U.S., I felt free. I felt safe.

After decades of being punished and threatened for standing up for human rights in my native country of Sudan, Minnesota has given my family a good life.

When the plane landed in the U.S., I felt free. I felt safe.

After decades of being punished and threatened for standing up for human rights in my native country of Sudan, Minnesota has given my family a good life. As a wheelchair attendant at Minneapolis-St. Paul International Airport, I enjoy helping passengers to and from their flights.  But now Trump’s Muslim ban threatens us with the same intolerance I experienced and fought against in Sudan. That’s why I joined with other members of SEIU to speak out against it. 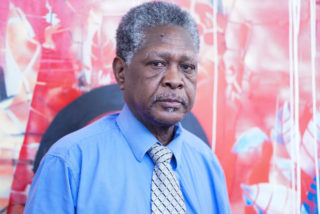 Everyone here in the U.S. has made me feel welcome. Really. Especially working at the airport, talking to the passengers I help.

Like many people from Sudan, I am a Muslim. Like many people of conscience, I stood up against religious intolerance when it started to threaten vulnerable people in my country. In the 1980s, the government began a public campaign of harsh punishments for minor religious offenses. As a practicing Muslim and a law student, I determined that the law was inhumane, did not reflect true Islamic beliefs, and punished Christians and those who followed indigenous African religions.

As a scholar of the law, I determined that my life would be without meaning unless I opposed this new law.

The night I participated in the first public demonstration against the harsh religious law, in 1983, I was arrested and beaten. That night they woke me in the middle of the night and beat me again, forced me to stand on one leg for a long time, forced me to put on wet clothes, and forced me to sign a statement that I would not oppose the law.

By the time of the military coup in 1989, I had passed the bar exam. As a practicing lawyer, I remained true to my beliefs, and continued to stand up for freedom of religion and against religious intolerance. I was an active member of the Union of Lawyers that opposed the military regime. We went from town to town, talking to young lawyers about alternatives to the law. So I remained on the list of opponents who were targeted by the government.

Then one night, they took me to a “Ghost House” where I was tortured, along with many other prominent people, for seven weeks. Besides beatings and cigarette burns, we were called one by one to “swim” for hours in a small hole full of dirty water, which included human waste from the bathrooms. I tried to get out of the water, but I was beaten back every time. I suffered stomach problems for more than 20 years, until I was able to get treatment in the United States. After a while, we weren’t given any food. I lost 33 pounds in those 48 days. I also developed diabetes.

I was trembling from all of this torture. I told myself, these people if they don’t kill me I will die from this treatment.

When I was transferred with some of my fellow prisoners to the Kober prison, we laughed and called it the “Hotel Kober,” a five-star hotel. Instead of sleeping on cardboard on a rocky dirt floor, we were given an iron bed and a blanket. We were also given healthy food to eat and, eventually medical treatment for my broken rib. This is where I was diagnosed with diabetes.

I’ll never forget what they did to me. Not just to me. To other people, too. We were all in the same room. Some people died there in the ghost house.

After a year in prison, I was freed. My brother accompanied me back to our home town. It was a shock to my mother, whose health was very bad after a year of not knowing whether her son was alive, or what was happening to me.

When we got close to the house, the neighbor kids, all of them, ran to the door and told my mom I was coming. She couldn’t come out to see me. She couldn’t stand up. I found her sitting in bed, very skinny.

I got to spend seven days with my mother before she slipped into a coma.

The hardest part was that, at that time, I thought I was the reason she died. But now…I understand that they were the reason.

I was still not fully free. The security forces made it clear that I was not safe in the capital city of Khartoum, and even took me back into custody every time the president came to my hometown of Shendi. Members of my wife’s family were afraid, and didn’t feel secure in my presence. I felt that this government would never leave me alone.

In 2008, the regime took away my license to practice law, and I was no longer able to support my family. In 2010, my wife, who was a manager in the government tax bureau, was transferred to Khartoum. She asked permission for me to come with her, and they granted it. But three months later, the security forces pulled me over at gunpoint, and then rammed into my car. People came running from the market, thinking there had been a car accident, and I was able to escape.

During that time I moved every few hours so the security police could not find me. At last I decided I must leave Sudan.

I am safe now.

But I miss the land. My family has a big farm back in Shendi. I also miss my brothers and sisters. I would like to be able to go back to visit them, and my daughter. I need to sell the farm and bring the money here to Minnesota to start a small business.

My life is very good here in Minnesota. I just want to be able to put my old life behind me, and focus on the future here. It’s important to be able to bring my family together. The first person I want to bring back to Minnesota is my daughter, who is a med student in Khartoum right now.

You can read about how we joined together to oppose the Muslim travel ban in USA Today and Newsweek.