Judge Grant’s nomination is a threat to working families and our ability to stand together in unions.

A union is the best thing a working person can have to improve their job.

I learned this in my home of Jamaica where I was a proud union member.  It’s the reason why I’m fighting alongside my fellow baggage handlers at Miami International Airport to win a union.

It is also why I’m calling on the U.S. Senate to reject Judge Britt Grant’s nomination the US Court of Appeals. 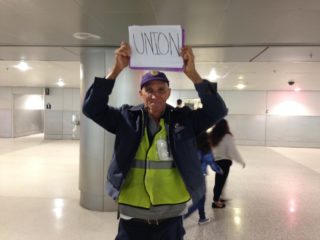 Judge Grant’s nomination is a threat to working families and our ability to stand together in unions.

Judge Grant has already demonstrated that she doesn’t value equality and fairness for all working people. She’s fought against union members by filing an amicus brief in the Friedrichs v. California Teachers Association case. She’s also called on the Supreme Court to overrule the historic Abood v. Detroit Board of Education ruling saying that unions shouldn’t be an exclusive bargaining representatives for working people.

America needs unions; not judges who will make it harder for us to get good, union jobs.

So many people in our country are working longer and harder than before but yet we still can barely make ends meet. I’m one of these people.

Although I work hard -- handling more than 600 pieces of luggage during my shifts -- I live paycheck to paycheck.  Sometimes, I can’t even buy my children or grandchildren birthday presents after I pay my bills.

For Floridians like me unions are the only way we can negotiate for higher wages, safer working conditions and respect. And we’re not alone.

We need fair-minded judges who understand that the law should provide everyone with a level playing field. Corporations aren’t more important than the people that keep them running.

Working people need judges who will not be a rubber stamp for our president.  Billionaires, have tried to use their power and money to influence our courts to increase their profit margins.

Working people need judges who know that everyone is created equal and have a proven track record of being fair in the decisions they make. This is a time in our country when tensions are high. Working people are fighting to get ahead. Immigrant children are being ripped away from their parents at our borders and forced to sleep in cages. We need judges who understand the constitution is supposed to protect us all.

Judge Grant’s track record demonstrates she will stand against our needs as working people. That’s why I’m calling my Senators to oppose her nomination the 11th circuit court. Join me. Call your senator today at 202-224-3121.

Also, join working people across the country as we tell our elected officials that America Needs Good Union Jobs.