SEIU Local 1 janitors, joined by supporters and elected officials, announced Tuesday their historic contract victory which includes raises to $15 dollars per hour in year three of their four-year contract.

Their win is the first in the energetic movement to build One Detroit: a city in which all working people —white, black and brown— enjoy the benefits of the downtown resurgence with the higher wages they need to support their loved ones and the communities they live in.

Despite a booming downtown economy, many workers who keep Detroit’s buildings clean are struggling to get by, with some being paid as little as $9.45 per hour. The average pay for janitors is so low that many must rely on public assistance just to make ends meet.

This victory changes that, and while the fight for One Detroit starts with higher wages for hardworking janitors, it also includes $15 and union rights for fast food workers, security officers, airport workers and more.

“This new contract means a better future for myself, my children and my community,” said Local 1 Detroit Metropolitan Airport Janitor Jasmine Hall. “But our fight for One Detroit isn’t over - we won’t stop until security officers, airport workers, arena workers, fast food workers and more can support their families with a $15 wage and good union jobs.” 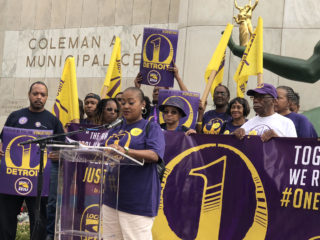