Fight for $15 and a Union activist, McDonald’s employee Terrence Wise testifies before Congress on the $15/hour minimum wage bill

“My family has been homeless despite two incomes” 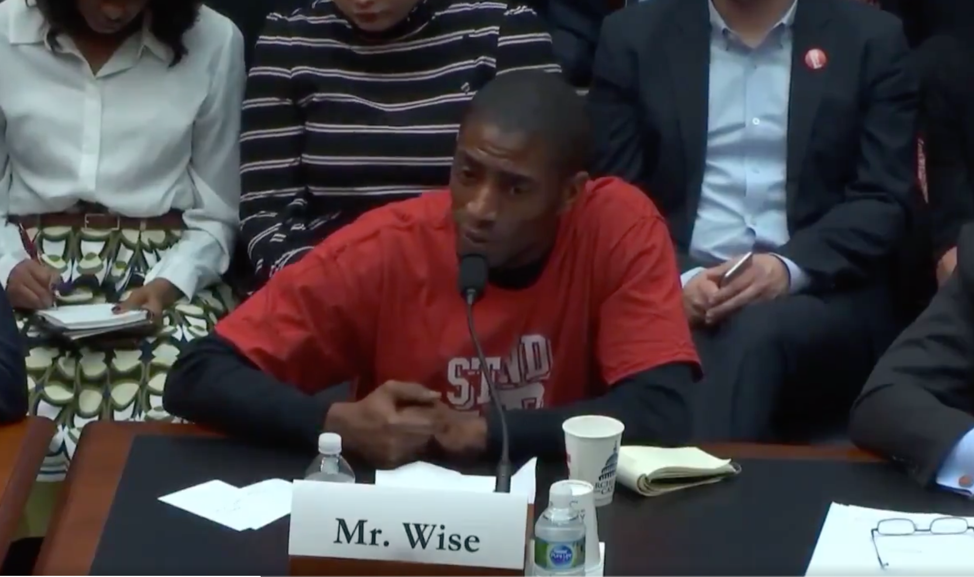 Everyone who works—no matter where they are from or the color of their skin—deserves to be paid enough to lead a decent life and provide for their family. That’s why Terrence Wise, a McDonald’s employee and Fight for $15 and a Union leader from Kansas City, Mo.,, testified Thursday before the House Education and Labor committee on the Raise the Wage Act.  This bill would raise the federal minimum wage to $15 an hour by the year 2024.

Wise told the committee about the struggles he and his fiancée face every day trying to raise three daughters, despite both of them working full-time. “My family has been homeless despite two incomes,” he said. “We’ve endured freezing temperatures in our purple minivan. I’d see my daughters’ eyes wide open, tossing and turning, in the back seat. Try waking up in the morning and getting ready for work and school in a parking lot with your family of five”

Wise also told committee members about why he joined the Fight for $15 and a Union movement and what he hopes to accomplish. “I’m fighting to ensure my mother’s past and my present is not my daughters’ future. This movement has changed my life and empowered my entire family. My daughters march on the front lines with me during strikes and rallies in the Fight for $15 and a Union. They understand what it means to fight for justice and do whatever it takes.”

The Fight for $15 and a Union began in 2012 when two hundred fast-food workers walked off the job to demand $15 an hour and union rights in New York City. They are now a global movement in over 300 cities on six continents. The Fight for $15 and a Union is comprised of fast-food workers, home health aides, child care teachers, airport workers, adjunct professors, retail employees – and underpaid workers everywhere. They have already won raises for 22 million people across the country – including 10 million who are on their way to $15 an hour – all because working people came together and acted like a union. Those involved with the Fight for $15 and a Union will keep on fighting, no matter the challenge, until everyone in the United States who works full time is able to provide for their families by making at least $15 an hour and has the opportunity to join a union, no matter where they work.