Four reasons why we should #RaisetheWage

It’s good for working families and our communities

By: Richard Eiker, Fight for $15 and a Union

By: Richard Eiker, Fight for $15 and a Union

Remember the year 2009? Barack Obama was president. The Black Eyed Peas had the number one song in the country. And millions of working Americans saw an increase in their paychecks as Congress increased the federal minimum wage to $7.25/hr. A lot has changed since those days except one thing: our minimum wage!

That’s why I am standing up and speaking out for change with my brothers and sisters in the Fight for $15 and a Union movement. We all come from different racial, religious and occupational backgrounds but we speak with one voice as we demand better wages and our elected officials are listening!  A bill to raise the federal minimum wage to $15 has been introduced in Congress!

Fight for $15 activists, SEIU members, and our allies are committed making this bill into law so we’re calling Congress on Thursday, April 4!  Here are four reasons why you should join us by telling your representative to support the Raise the Wage Act: 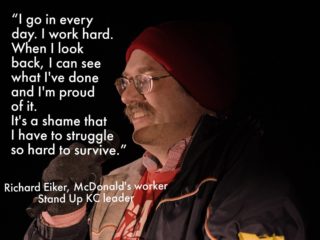 1.     The federal minimum wage is long overdue for a raise. Seriously, it’s been a decade. Can you imagine working hard for years with no pay increase although the cost of gas, utilities, rent and groceries have increased? It’s the reality faced by millions of Americans who provide care for our children and grandparents, clean our planes and prepare our family’s meals every day.

2.     Raising the federal minimum wage is not only good for working people; it’s great for our communities. Boosting pay puts money into the hands of working moms, dads and grandparents who would in turn help grow our economy. With more income, they buy homes, cars and support small businesses in their neighborhoods, cities and states. Our entire country succeeds when we create good jobs with livable wages, empower working people through unions and invest in our future.

3.     Working people demanded it! Elected officials should listen to us. Millions of voters cast ballots in the 2018 elections to demand higher wages, affordable healthcare and the right to join a union no matter where you work. Voters in my city, Kansas City, Missouri, voted for a city-wide $15 minimum wage last year.  Like working people across the country, we did this because we’re tired of being overworked and underpaid. Passing the Raise the Wage Act not only respects our voice, it’s a strong step forward in creating an economy that works for all of us.

4.     Everyone who works deserves to be paid enough to have a decent life. Far too many people who work hard and play by the rules are one paycheck away from being homeless. That’s not right!  No matter where they are from or what the color of their skin is, every working person in our country should be able to provide for their families. It is time for us to have a minimum wage that reflects America’s core values; not corporate interests.

Need a few more reasons for why you should support the Raise the Wage Act? Watch this video.

Richard Eiker is a maintenance worker for McDonald’s.  He lives in Kansas City, Missouri