At the Southwest Airlines shareholder meeting in Denver, baggage handlers, wheelchair attendants, cabin cleaners and security officers from Los Angeles, San Francisco and Denver carried signs that said 'Show us some LUV: health care, fair wages, union rights' and handed out a spoof version of Southwest's infamous drink coupons that urge the public to tell CEO Gary Kelly that #PovertyDoesntFly. As Southwest Airlines (NYSE ticker symbol LUV) is under fire for the 737 Max crisis and lower satisfaction ratings, airport workers are parodying the airline’s branding to expose the harsh reality of inequity and safety concerns behind the airline’s façade of love and kindness.

“I've worked for thirteen years doing security work,” said Los Angeles International Airport employee Maria Romero. “But when Southwest Airlines switched our jobs to a company called S.A.S. Services, we lost our seniority and the stability of knowing what jobs we're being asked to do day to day. We even lost most of our health insurance. This has had a big impact on my ability to afford my prescription eye glasses, which I need to monitor security cameras. Passengers are depending on our ability to see details, so why won’t they cover us to have updated eye prescriptions?”

Behind its friendly public image, Southwest is contracting out what used to be good union jobs to companies like S.A.S. Services Group, whose owners have been cited for nearly $1,000,000 in wage theft at LAX. In Denver, working men and women have called on Southwest contractor Prospect to stop requiring wheelchair attendants to fill in for other staff and handle baggage containing passengers' firearms without any hands-on safety training.

“As a wheelchair attendant, I ensure the safety and mobility of passengers navigating our busy airport,” says Medina Adem from SEIU Local 105. “On top of that responsibility, my coworkers and I have been forced to move oversized baggage and luggage containing firearms, jobs we were not hired to do nor trained to do. With a union, we would have a voice on the job to call for the training we need to keep Denver workers and travelers safe.” 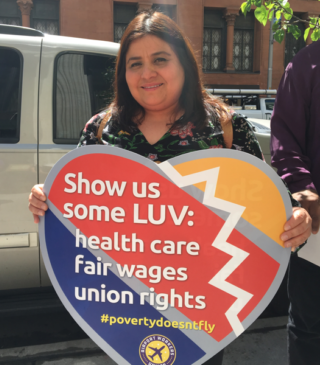