California’s 40,000 child care providers: On their way to winning the freedom to join together

Fighting to make history this year

California’s 40,000 family child care providers are fighting to make history this year in their 15-year campaign to unionize, to join together to make improvements to the state’s early childhood education system—an underfunded system they so dedicatedly support despite poverty wages.

A joint partnership between two unions, SEIU and AFSCME, the providers’ long cooperative campaign is a testament to the passion they hold for their profession.

Now, along with parents, grandparents, and community partners, they’re pushing for passage of AB 378, the Building a Better Early Care and Education System Act, which would make California the 12th state to provide early childhood educators with collective bargaining rights. 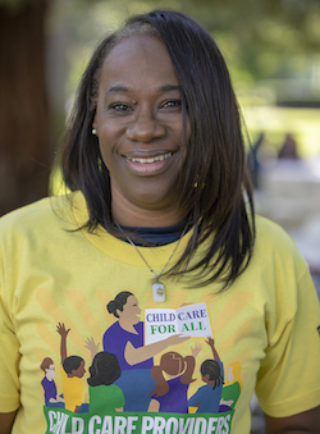 With a seat at the table, child care providers would be able to effectively fight for their profession—to negotiate for fair wages and benefits, plus access to affordable training and professional development.

California’s early childhood education system compensates providers so poorly that nearly 60 percent of the state’s workforce relies on government assistance programs to get by, according to the Institute for Research on Labor and Employment at UC Berkeley.

Although responsible for educating and developing children, they aren’t even covered by basic labor laws such as minimum wage or workers compensation!

The providers would also be able to advocate for increased state funding for child care subsidies so more low-income families could access licensed child care programs. Full time care in California costs up to $17,000 per year per child, a whopping 70% of a typical single mother's income.

Sign our petition demanding a strong union voice for child care providers and a strong developmental start for more children!

A union and the right to negotiate with the state is the only way for these providers to take care of themselves so they can continue to serve the children and families they love to care for.

Be a part of history. AB 378 would lead to the largest single union-organizing victory in two decades and the largest organizing campaign of childcare providers in U.S. history!  Sign our petition today.