McDonald’s Worker Refuses to Be Silent

McDonald’s Crew Member Jamelia Fairley of central Florida didn’t have to think long and hard about whether she should report the two coworkers who were harassing her to her corporate-owned store managers. After all, she was having to avoid certain areas of the store to prevent their physical advances and inappropriate verbal comments. How can any employee working under such circumstances “give their all”? 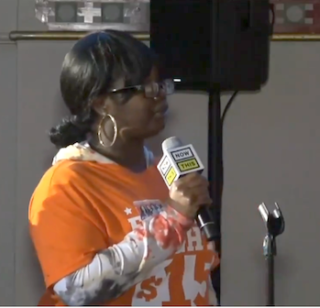 She also knew that if she didn’t speak out, other co-workers would likely be subjected to the same abusive, humiliating environment. In addition, she thought about her two-year-old daughter. “What if she has to work for McDonald’s one day and something like this happens to her?” the 23-year-old says she asked herself. “What if no one stands up for her?”

So she took action. “I reported both men's vile behavior several times,” she says. And while they faced consequences, she learned what often happens when one lone voice speaks up. “They cut my hours, pretty much. I am working seven hours per week now. I used to work 25 hours (38 hours before my daughter was born), so it is making it impossible for me to feed my daughter or have child care."

McDonald’s tried to make Jamelia go away, rather than put a hard stop to what is now considered by many to be a company-wide, systemic sexual harassment problem. And considering its unjust power imbalance, McDonald’s would have very likely gotten away with it had it not been for the thousands of fast food workers in recent years who’ve joined together in the Fight for $15 and a Union movement—organizing to ensure we all feel safe and respected at work, organizing for living wages so we can all support our families. 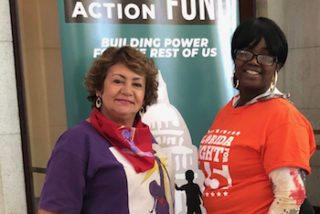 Jamelia is one of them, and thanks to her involvement, she’s one of 50 women who recently filed a sexual harassment claim against McDonald’s with the Equal Employment Opportunity Commission.

But that’s just the start. “McDonald’s failure to stop sexual harassment at its stores shows why workers need union rights,” she says. “If we had a union, we could stick together on the job and hold the company accountable for not treating workers with respect."

Join Jamelia and working people from all over the country—Black, white and brown—in demanding #UnionsForAll!