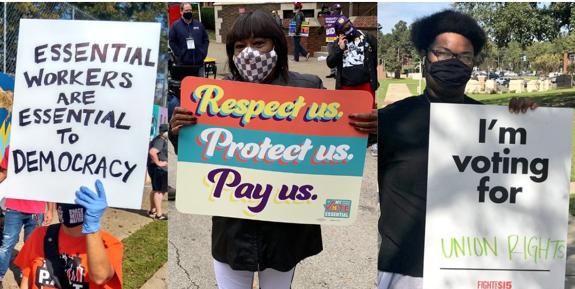 SEIU members and worker leaders in the Fight for $15 and a Union spread the word about why their votes are essential in 2020 during Saturday’s National Vote Early Day.  From New York City to Detroit to Miami, workers participated in more than 30 actions in over 10 major cities alongside celebrities, including the rapper Common and comedian Patton Oswalt, and elected officials.

“This election is critical for frontline workers because too many of us are not safe at work,” said Wanda Coker, a Burger King worker and member of NC Raise Up/Fight for $15 and a Union. “North Carolina's Labor Commissioner has done absolutely nothing to protect essential workers like me. Electing a new Labor Commissioner is one of the many reasons I am voting early.”

Coker and other NC Raise Up $15 members participated in a march to the polls with community partners and elected officials in Fayetteville.

SEIU and its partner organizations had already made more than 28 million phone calls, sent almost 50 million text messages, and by election day will have knocked on more than 2 million doors in order to drive voters to the polls.  Their messages of #MyVoteIsEssential will continue throughout of the country from now until election day.