Be both a protest leader and an elected leader! It's the path to progress. 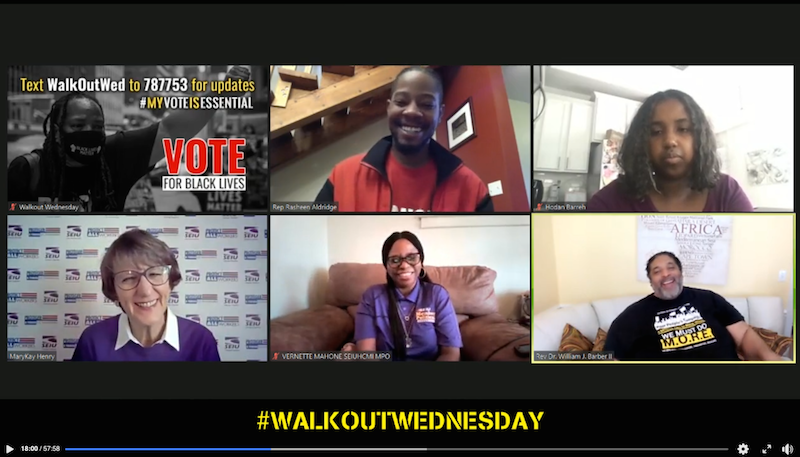 We’ve marched, gone on strike and taken to the streets to demand Black lives be valued. The October 21st #WalkOutWednesday conversation centered on how voting can be another important tactic in the fight for racial justice.

In the conversation, which took place just 14 days before Election Day, the group discussed how working people can make change from the White House to the statehouse by "bringing the streets into the suites"—the interconnectedness of protest and policy, with policy as a form of protest.

Conversation participant Missouri State Rep. Rasheen Aldridge, who authored his state's $15 minimum wage bill, was out protesting poverty wages in the St. Louis streets in 2013 when he was 19 and living paycheck-to-paycheck as a Jimmy John's worker.

The following year he helped organize the Ferguson protests using his Fight for $15 and a Union organizing skills. "We held many actions, and we connected with the Fight for $15 (campaign) because we knew the importance of Black lives but also of Black workers ...these same workers who are living in these communities with over-policing, these same workers that are living in these communities with high poverty. You can't talk about police reform without talking about the low wages that these individuals are making," he said.

Now at 26, Missouri State Rep. Rasheen Aldridge is both a protest leader and an elected leader. Both—not just one. "I'm part of a group here called Expect Us, which has been organizing around police reform… This last session we led a protest to the Capitol, to the most powerful chambers in the state of Missouri. We shut down the Senate. Then we came back the next week, we did banner drops and shut down the House. …[I did this] as a legislator," he said.

Indeed, we can elect new leaders who will create change to protect all working people from the greed of a concentrated few—by rewriting the laws to ensure the work primarily done by Black and brown people is respected and to ensure that the people who do the work have union rights.

Fellow conversation participant Rev. William J. Barber II, co-founder of the #PoorPeoplesCampaign, noted to Rep. Aldridge, "Even your presence is a form of protest. ...The fact that you're 26, came by the streets, sitting in the legislature, and you've kept your ideals and you're pushing the bills, that is in fact protesting the system that says the people might be doing something in the streets but we don't have to pay attention, we're just going to keep going the way we're going."

Hodan Barreh with the Future Coalition agreed: "Protest will always have to do with politics. For example, Martin Luther King was heavily involved in politics while he was out protesting in the streets, and he was able to make immense change. They're definitely interconnected, and I don't see how they couldn't be."