#WalkOutWednesday: Even for Those Who Can’t Vote, There is Much Riding on This Election

Workers with temporary protected status are especially impacted by the upcoming election. 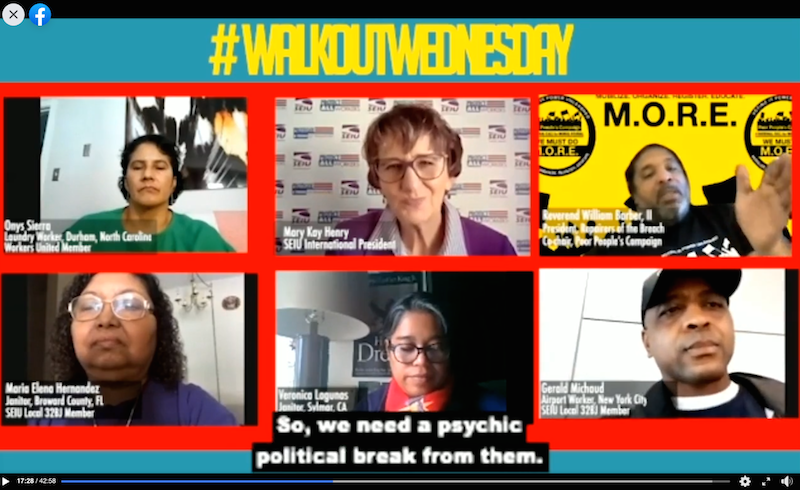 Gerald Michaud, Airport Worker, New York, SEIU 32BJ member
An immigrant from Haiti, Gerald was working in the United States when an earthquake devastated his home country, making it unsafe for him to return home. He works 7 days a week at 3 jobs to support his wife, son and 12 other family members in Haiti.

Veronica Lagunas, Janitor, California, SEIU-United Service Workers West member
An immigrant from El Salvador, Veronica is at risk of being forced to leave the U.S. by November 5, leaving her two U.S. citizen children behind. As the co-founder of the Ya Basta! Coalition, she has helped raise awareness about sexual harrasment and violence in the janitorial industry and has trained other janitors and supervisors to identify and stop harassment, assault and rape, as well as deal with barriers to reporting crimes.

Onys Sierra, Laundry Worker, North Carolina, SEIU Southern Regional Joint Board member
An immigrant from Honduras, Onys was granted temporary protected status after hurricane Mitch devastated her home country. Her 29-year-old daughter, who was just two years old when she and her mother came to the United States, is also in danger of losing her DACA status and being forced to leave the United States and her two U.S. citizen children.

Maria Elena Hernandez, Janitor, Florida, SEIU 32BJ member
As an SEIU union member, Nicaraguan immigrant Maria Elena has fought and won living wages, vacation days, health care and other benefits for herself and her co-workers. She has also helped hundreds of South Florida workers win their own union. "Many people with TPS are afraid to come out and tell their stories for fear of being targeted. But I tell them not to be afraid. People need to hear from us to see that we are human and we also have rights and are contributing members of society. We pay our taxes, contribute to our communities and in my case, help workers stand up for their rights."