California Fast-Food Workers Turn Up the Heat on Union Demand

Emmanuel Flores, McDonald’s worker, found his voice in the Fight for $15 and a Union.

This week, Emmanuel Flores led an action outside his Los Angeles store demanding accountability for the hostile work environment, discrimination, and sexual harassment to which he and his fellow workers are subjected.

Standing up to authority hasn’t always been something I’ve been comfortable with. But, like anyone, I have my limits. When I became the target of sexual harassment and discrimination because of my disability, I knew I had to speak up, and being a part of the Fight for $15 and a Union helped me find my voice.

My name is Emmanuel Flores, I’m 28-years old and I’ve been working the counter at McDonald’s for 5 years. 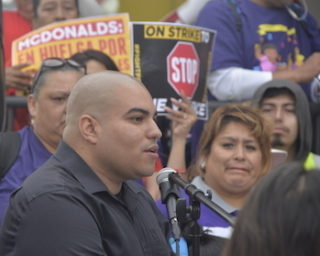 When I first started at my store, I witnessed behavior by co-workers and managers that made me feel uncomfortable: sexual jokes, sexually explicit photos being shared openly, teasing and, at times, intimidation.

Because my managers were in on all this, I came to accept this work environment as the norm. I kept my head down and focused on serving customers knowing I was just there to get a paycheck.

Until I was sexually harassed at work.

Rather than discipline my harasser, they turned the tables on me, accusing me of initiating the interaction, despite me protesting that I would never speak to anyone that way. I was accused of “not being able to take a joke” and taking things “too seriously.”

A second incident, by a different co-worker, left me feeling degraded and broke my spirit. Again, I complained, and again, no action was taken to address my complaint or the behavior of my co-workers. Each time I spoke up, I was knocked back down with worse treatment on the job. My hours were cut and despite having a documented (and visible) disability of my hands, I was assigned to heavy lifting prohibited by my doctors. Out of fear that I’d face further retribution, I tried to complete these tasks, only to injure my hands further.

All this workplace stress, coupled with a congenital heart disease I’ve had since birth, has caused severe panic attacks on the job and even when I’m home. My mental health and physical health began to suffer from my hostile workplace. 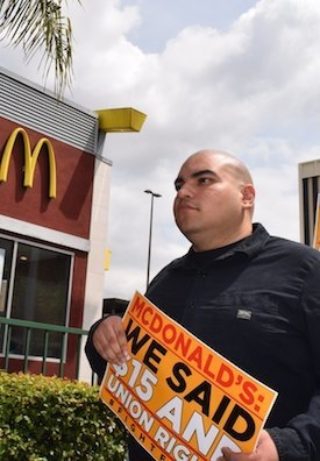 Together, we filed sexual harassment complaints against the company and our managers, charging them with allowing a pervasive culture of sexual harassment in our store. With that, we joined a larger coalition of low-wage, fast-food workers who have been fighting for higher wages and their right to join together in a union for the past 8 years.

I went from being too afraid to call out inappropriate, illegal behavior in my workplace to leading a protest this week outside of my store calling out McDonald’s failure to address the complaints of its front-line workers. As part of the Fight for $15 and a Union, I’ve realized the importance of worker power on the job.

We can’t count on the billion-dollar companies we work for to have our backs. We need union rights. And until we win our union rights, fast-food workers will continue standing together and fighting for dignity and respect in our workplaces.