“I feel lucky to be part of a union—but it shouldn’t be a matter of luck. Everyone, no matter what you look like or where you work, should be able to join a union.” 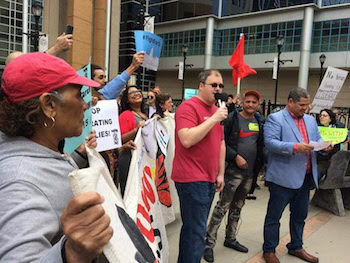 My name is Chris Ellis. I work for the Berks County Assistance Office in Reading, Pennsylvania and I am a proud member of the Pennsylvania Social Services Union, SEIU Local 668.

I live and work in Reading. It’s a diverse city filled with hard-working families but it also has its troubles. It was named the poorest city in the country in 2011 when the official poverty rate was 40 percent.

In my job as an Income Maintenance Caseworker, I work with families who are applying for SNAP and Medicaid, and I see how hard it is for people to survive on a $7.25 minimum wage. I also grow disheartened when I see corporations and millionaires get tax break after tax break. This takes money from the public services that our communities need. I know the system is rigged against working people and that’s why I’m happy to speak out against these injustices to make a difference.

As a union member, I earn a fair salary and have good health insurance for myself and my daughter. This is especially important for me because I have a heart condition—I’m actually on my fourth pacemaker—that requires critical medical care that would be out of reach for me without adequate healthcare coverage. It gives me peace of mind and helps me focus on my work.

Additionally, since I earn a wage that reflects the important services I provide for the commonwealth, I can send my daughter to college, confident in my ability to help her pay for it. For these reasons and plenty of others, I feel lucky to be part of a union—but it shouldn’t be a matter of luck. Everyone, no matter what you look like or where you work, should be able to join a union.

I’m also thankful that being part of my union gives me a chance to forge strong bonds with my co-workers and to participate in meaningful actions that make a real difference.

For example, last October I attended the Unions For All summit in Los Angeles and introduced Vice President Joe Biden before he spoke to everyone. It was so exciting. The whole experience at the summit reinforced the idea that we need to hold our elected officials accountable and make sure they’re backing us up on the issues we care about—especially about making it easier for people to come together in unions. If we don’t stand up for ourselves, who will?

In Pennsylvania, my fellow union members and I have spoken out against limiting key services for struggling families. We’ve also fought against cuts to unemployment services and fought for raising the minimum wage in our state. While we’re facing stiff political headwinds and haven’t been able to raise the wage yet, we won’t give up until we get it. We know that by taking action together, we can be a positive voice for change.

Union activism is in my blood. My grandfather helped organize Ironworkers at a Bethlehem Steel mine. After his passing, my grandmother had to work for years for little money and longed for the ability to join a union herself. She worked longer than she should have, and retirement security was just a dream. This made me realize the positive effect unions can have on your community and in the workplace.

Now more than ever, all people should be able to have a voice on the job, not just for themselves, but so they can improve the lives of those around them. In my industry, having a say means we aren’t overburdened by heavy workloads, and that we can earn a decent wage and have access to quality healthcare.

I know that isn’t the case for all workers around the country, but it should be. I stand with my fellow public workers in Virginia and Colorado who are fighting for the ability to collectively bargain with their respective states.