In a vital election, VP Biden is the candidate to stand with working people. 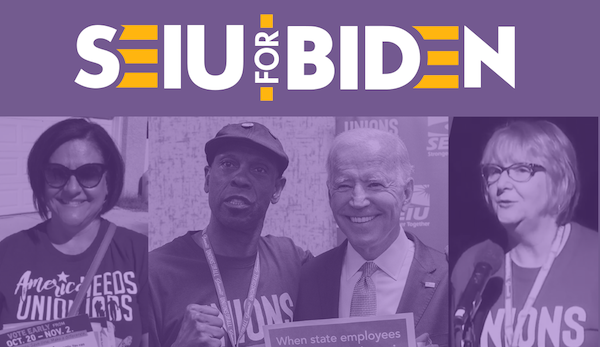 As union members, we do not take our endorsement process lightly. In our own way, we’re all feeling the crush of three crises right now—a pandemic our federal government has failed to contain, structural racism and police brutality that kills Black people, and a rigged economy that only ever worked for those at the top. As we head toward November with unemployment rates not seen since the Great Depression and a virus tearing through our communities, it’s clear this is not an election to sit out.

In this moment of great uncertainty and turmoil, we need a strong leader who understands the needs of working people—brown, Black, white, or API. That leader is Vice President Joe Biden.

Watch this video to see why.

I’ve worked at a nursing home caring for the elderly since 1995. At my work, I’ve seen firsthand how devastating it can be when structural racism, a pandemic, and economic insecurity hits one group. Most of the workers and patients at the home where I work ARE Black and brown. We were always understaffed, underpaid, and undervalued. Now with a pandemic, we’re the ones suffering the most and risking our lives just so we don’t lose our homes.

Those of us on the front lines—who are finally considered essential for the first time—are fighting to transform our country. We need a leader who has our back.

Vice President Biden has fought alongside us to raise wages and has stood up for our right to join together in a union. He has spoken out in support of the Fight for $15 and a Union movement and raising the minimum wage. He worked to expand access to healthcare by getting the Affordable Care Act passed, and he would build on it by creating a federal public option that would co-exist with employer-sponsored and other private insurance. He also supports the Green New Deal. And perhaps most critically, the former Vice President has worked to unite people across racial lines rather than fanning the flames of division.

As my union brother Chris Ellis, income maintenance caseworker, said, “Vice President Joe Biden has always spoken about the issues that affect working people. He’s a good man that I think cares about people... that people are able to raise a family with dignity and security.”

The Vice President spoke passionately to our fellow SEIU members on the lack of affordable, quality healthcare and the importance of dignity on the job saying, “My dad used to say your job’s about more than a paycheck. It’s about dignity. It’s about respect. It’s about your place in the community. Too many people can’t look their kids in the eye and tell them it’s going to be OK. That’s what this is all about, it’s all about dignity. How can a parent maintain their dignity when they look at a child with a preexisting condition? I make you a commitment, I make all of you a commitment. I will protect your right to healthcare as if it were my own family.”

Last fall, speaking at the Unions for All Summit in Los Angeles, Vice President Biden promised that, “If I’m your president you will never have a more union-friendly president. When workers do well, everybody does well. Everybody should have a $15 minimum, across the board. When I was in office we raised it to $10.10, I will raise it to $15... We’re not bending or bowing any more, we’re going to take this country back and unions are going to be the ones to do it.” He has also said, “The only way you can fight back power is with more power and that’s union power.”

Tseganesh Endegeshet, an airport worker and now an SEIU member, listened to the Vice President speak as she was in the middle of the fight for her union and just off the strike line. “He understands the struggle for immigrants and working people in this country,” she said. “He’s the only one who is going to care about us.”

SEIU endorses Vice President Joe Biden for president and looks forward to fighting alongside him for the world we know is possible. Read more.