“Ain’t Gonna Let Nobody Turn Me Around” 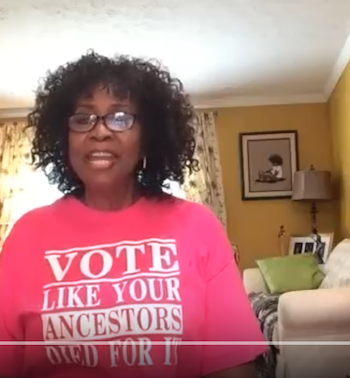 By Tilly Blanding, a retired social worker and member leader of SEIU VA512

“Ain’t Gonna Let Nobody Turn Me Around” was what I sang while marching alongside the Rev. Martin Luther King Jr. as a 13 year-old. Even though I have faced many dangers as an activist demonstrating and protesting, like having a loaded gun pulled on me at a picket line, I refused to back down from fighting to ensure that every eligible voter has a voice in our democracy.

When we vote, we’re voicing our vision for the path of our families and our communities. This is vital to how we create a democracy that works for all of us. If the greedy few prevent eligible voters from exercising their rights, it threatens America’s principles of inclusion, equality and justice.

It’s disappointing to see self-interested politicians and their allies attempting to divide us while they hurt us all by trying to take away the power we have when we’re civically active. It’s unfathomable to see racial discrimination now similar to what I saw as a teenager during the Civil Rights Movement. When I was arrested for protesting in the 1960s, I would have never thought that we would still be fighting many of the same battles today. That’s why I’m going to continue to encourage everyone I meet to vote your values and value your vote.

Activists during the Civil Rights Movement sacrificed so much for our right to have a voice at the ballot box and that’s why I’m choosing to stay in the march for civil rights by registering people to vote and joining the social justice ministry at my church. United with my union family, we’re supporting candidates who believe our democracy works best when everybody can participate, no matter what we look like, where we’re born or where we work.

The same self-interested politicians that aim to use race to cause division and silence us at the ballot box are the ones who want to make it harder for working people to join together in unions so the power stays in the hands of corporations and billionaires.

As a teenage activist in the 60’s, I learned that change is possible but it’s pivotal that we work together across racial lines. As a Black woman, and as an American, my vote is essential. This November, we will be heard.