#WalkOutWednesday: Voting on the Mind

Essential workers speak their minds and lift up their get-out-the-vote efforts. 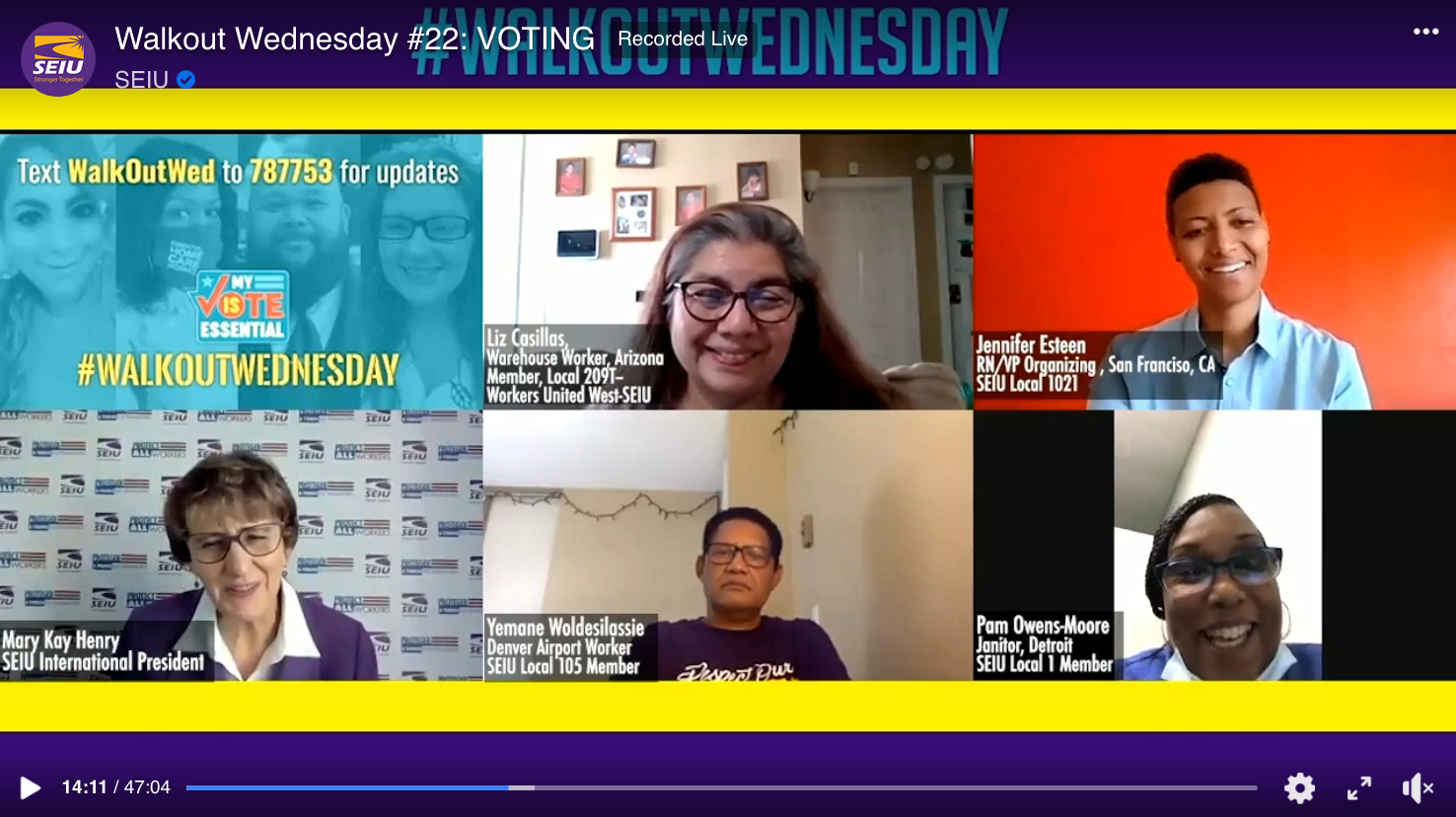 Voting is on all of our minds right now, especially registering to vote and voting early. We need to elect progressive champions so we can make great strides forward in our three demands: Respect us, Protect us, Pay us.

On this week's #WalkOutWednesday, SEIU President Mary Kay Henry and essential workers stressed the importance of winning up and down the ballot this November—not just at the presidential and vice presidential levels—and of educating ourselves on state-specific propositions.

Four workers from different backgrounds talked about what's on their minds and what they're doing to bring people together to exercise our incredible power to vote so we can create bold transformative change versus going back to "normal," which wasn't working for many of us.

Jennifer Esteen, Psychiatric RN, San Francisco Department of Public Health
Among other social justice feats, Jennifer Esteen and her fellow SEIU 1021 members were instrumental in keeping the doors of the Lyon-Martin Health Services and Women’s Community Clinic open. Lyon-Martin is the only facility in San Francisco that provides primary medical care, sexual and reproductive health care, and mental health services for women, gender non-conforming people and transgender people of all gender identities and sexual orientations, regardless of their ability to pay. Jennifer lives with her wife and children.

Elizabeth Casillas, Warehouse Worker, HomeGoods, Arizona
Through Workers United West-SEIU, Local 289T, where Elizabeth Casillas serves as union steward and executive board member, she was involved in the immigration justice movement in Arizona. She joined SEIU members from across the country in September 2019 to directly lobby Congress in DC to pass a $15 minimum wage, protect Dreamers and TPS recipients and create paths for more workers to join unions.

Yemane Woldesilassie, Airport Worker, Denver International Airport
A leader on the job, working for a company that manages airport parking, Yemane Woldesilassie is an SEIU Local 105 executive board member and COPE committee member (Committee on Political Education). Since the spring, when many airport workers were laid off, he and his co-workers have kept in touch with their former co-workers—helping them to fill out unemployment benefit forms, find healthcare, and stay looped in on early voting efforts. Yemane is an Ethiopian immigrant, with a wife and two daughters, who has now lived in the US for a decade.

Pam Owens-Moore, Janitor, Detroit
SEIU Local 1 leader Pam Owens-Moore is talking voting, voting, voting with her co-workers, calling members and helping people get their hands on absentee ballots—making the connection between the current administration's inaction and why we need to show up in record numbers to vote like never before. As a Black woman, Pam has been disproportionately affected by COVID-19 deaths in her family and neighborhood.