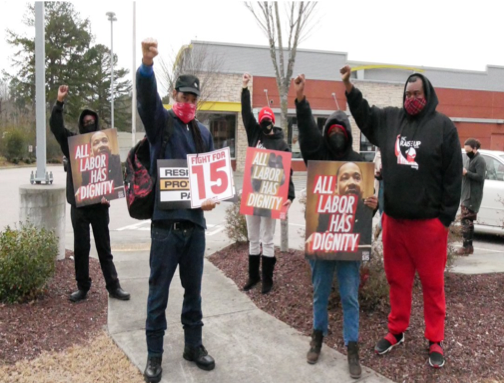 Less than 24 hours after President-elect Joe Biden announced his American Rescue Plan - which included a message for Congress to raise the federal minimum wage to $15 an hour - thousands of cooks and cashiers in the Fight for $15 and a Union walked off the job to demand higher pay. To commemorate the birthday and legacy of Dr. Martin Luther King Jr.’s fight for economic and racial justice, workers in 15 cities across the country declared a strike demanding McDonald’s and other fast food restaurants increase workers’ pay to $15/hour, respect their right to form a union, and provide the protection essential workers need in this pandemic.

“I’m striking today to carry on Martin Luther King Jr.’s fight for racial and economic justice in this country, which means every working person earns a living wage and has a job with dignity,” said Karesha Manns, a Memphis McDonald’s worker. “Right now, I only make $10/hr at McDonald’s, which isn’t enough to pay the bills or support my family. We’re striking to demand $15/hr from McDonald’s and other fast-food companies, and we won’t stop fighting until everyone in the United States makes at least $15/hr.”

“For me, $15 an hour would be life changing,”  Blalock said in a statement. “It’s a struggle to pay rent on the single room where I stay. Even getting enough to eat is a struggle sometimes. I am 54 years old and I have been working all my life, but $10 an hour is the most I’ve ever been paid.” She said she hoped Congress would move swiftly to pass the increase.

In California, where fast food workers have been devastated by the spike in COVID-19 cases at work - and McDonald’s operators have neglected to keep them safe on the job - striking cooks and cashiers continued their demand for $15 and stronger protection by holding a statewide virtual action.

“The managers at McDonald’s have known for weeks that workers at our restaurant were getting sick with COVID-19 and that the rest of us were being exposed,” wrote cashier Angely Rodriguez Lambert, 26. “But they did not tell us.”

As workers spoke out to address the rampant workplace health and safety issues, they garnered support from several assembly members like Assemblywoman Lorena Gonzalez, who introduced legislation specifically aimed at empowering workers in the fast food industry.

“We won a $15/hr wage here in California, but our fight isn’t over. Since day one of our movement, we’ve also demanded a voice on the job and accountability for corporations like McDonald’s that put profit over worker safety,” said Bartolome Perez, a Los Angeles McDonald’s leader and worker in the Fight for $15 and a Union. “We’re thrilled that champions like Assemblywoman Lorena Gonzalez have heard our demands and introduced the FAST Recovery Act.  Just as California led the nation with $15 an hour, we can lead again by taking the boldest steps yet to empower fast food workers like me.”