SEIU essential workers help get out the vote for Warnock, Ossoff in the Georgia run-off election 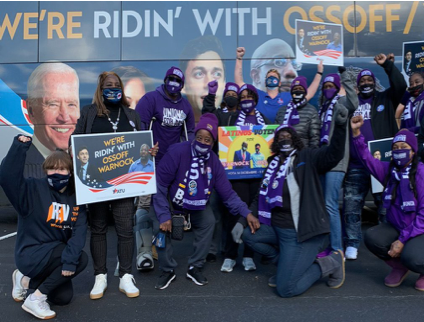 In coalition with partners across Georgia, SEIU members and Fight for $15 and a Union workers with our partners in the state knocked on over 10 million doors, made nearly two million phone calls and sent 7.5 million text messages to millions of voters across the state to propel Rev. Raphael Warnock and Jon Ossoff to victory in two Senate races.

These efforts have resulted in victories by pro-worker candidates Rev. Warnock and Ossoff to the Senate, ensuring that Mitch McConnell will no longer be able to pursue his anti-worker agenda on the floor of the Senate.  “Workers’ efforts delivered this victory in Georgia. We showed out in November and in this special election, because it’s time our leaders fight for our demands: a $15 an hour minimum wage and a voice on the job,” said Latonya Costa-Jones, a home care worker and Fight for $15 and a Union worker leader from Atlanta, Ga.