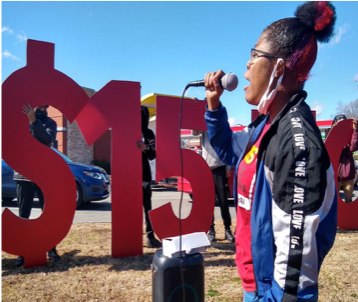 As the House of Representatives nears a vote on a $15 an hour minimum wage as part of President Joe Biden’s first COVID-19 relief package, fast-food workers struck in Charleston, Chicago, Detroit, Durham, Flint, Houston, Miami, Oakland, Orlando, Raleigh, Sacramento, San Jose, St. Louis, and Tampa to make demands of their employers. In Milwaukee, where Biden will be speaking later this evening, several McDonald’s workers walked off their job to join the strike line to demand $15 and union rights now. Fast-food workers in Los Angeles went on strike last week to demand an urgent response to COVID-19 safety concerns in the hard-hit city.

Fast-food workers are honoring Black History Month by emphasizing the crisis among Black communities who have faced generations of low pay and insufficient protections on the job, leaving them particularly vulnerable to COVID-19.

Across Florida, striking workers also called out an effort by a Republican legislator to carve out workers who have been previously incarcerated, are under 21, or are considered “hard to hire” from the $15 minimum wage passed by more than 60 percent of voters in November.

Detroit fast-food workers joined the strike virtually with Charleston and Atlanta fast-food workers to support on-the-ground action in Durham. Workers spoke out on the call and also chanted in unison, “put some respect on my check.”

In Durham, dozens of cars encircled a McDonald’s drive-thru and the line of cars spilled out into the street. Workers honked and chanted from their cars, and slowed down McDonald’s for almost an hour. One McDonald’s worker, Sylcoria Carrol, walked out of her job at noon and joined the action. Workers held up six-foot-tall letters that spelled out ‘PAY US $15 NOW”.