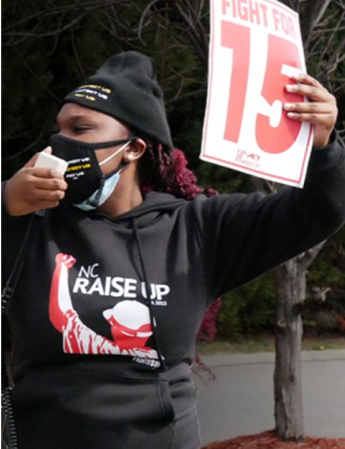 This year’s Black History Month coincided with a historic charge to institute a Federal $15/hr minimum wage in the United States. Among those leading this charge were thousands of Black Fight for $15 workers and activists who are did everything they could to win the higher pay people need to help families in this country. They  participated in strikes, submitted opinion pieces to newspapers their newspapers, hit the streets, met with members of Congress, dropped banners, posted on social media and encouraged family and friends to do the same.

Workers like Erma Henderson, a home care worker in Nevada, whose guest column on poverty wages in the home care workforce was published by the Las Vegas Sun in mid-Februarty. “ After 20 years, I only make $12.50 an hour and my job does not provide any health care, paid sick days or job-training opportunities. Poverty jobs are not only bad for home care workers; they’re bad for the families getting care for their loved ones, and by extension, bad for entire communities,” she wrote.

Alvin Major, an airport baggage handler in New York, had an inspirational column published in USA Today, where he talked about the first Fight For $15 strike he ever participated in- back in 2012.  “I was terrified I’d get fired for walking out, but, honestly, I had no choice,” he wrote. “Things were so hard, I could not survive on $7.25 any longer.” Major then talked about what all those years fighting for a living wage have amounted to, “Now, I work as a New York baggage handler making more than $17, and it will go up again soon, to $19. All thanks to raises won by the Fight for $15 and a union campaign… I no longer have to work three different jobs. I go to work at one place now, which means I have much more time to spend with my family.”

Queen Freelove, a Connecticut child care provider and member of CSEA/SEIU 2001, volunteered to appear in a Twitter graphic calling for a Federal increase to $15hr.  “$15/hr is make or break for us,” she says.  “People would not have to face eviction or close their daycares.”

Terrance Wise, a fast food worker and leading Fight for $15 activist from St. Louis, took his message directly to US Senators, as he testified in front of the Senate Budget Committee.  He told his powerful story about the struggles he and his fiancée face every day trying to raise three daughters, despite both of them working full-time. “My family has been homeless despite two incomes,” he said. “We’ve endured freezing temperatures in our purple minivan. I’d see my daughters’ eyes wide open, tossing and turning, in the back seat. Try waking up in the morning and getting ready for work and school in a parking lot with your family of five,” said Wise.

Then there are heroes like the three brave women who called for a $15/hr minimum wage and protested their poverty jobs by going on strike in North Carolina. Porche Vann, Kyona Kelley and Yashera Douglas walked off the job at their Little Caesars restaurant and spoke out about the impossibility of paying rent on $7.25 minimum wage and why they are fighting for all workers in their store.  "You can't really get into any apartments here in Fayetteville with a $7.25 paystub... That's not living. You can't live off that," said Vann.

These are just a few examples of the thousands of black activists across the country who are determined to win a $15/hr minimum wage this year. They—like the white, brown and API Fight for $15 heroes working side by side with them—know that there can be no racial justice without economic justice, and that a $15/hr Federal minimum wage would be a tremendous first step towards achieving these goals.