Urge Congress and Pres. Biden to create good union home care jobs and to put care at the heart of our nation’s recovery 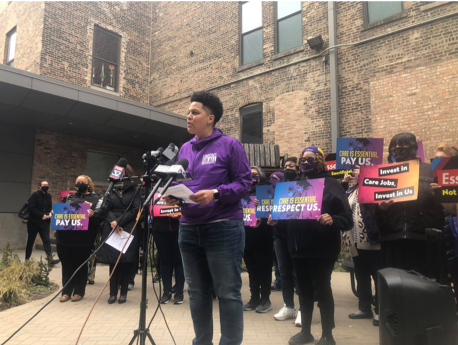 Home care and nursing home care workers across the country recently participated in a national day of action, commemorating one year of being on the front lines of the pandemic, caring for America’s parents, grandparents and people with disabilities.

In at least 28 digital and in-person actions in seven states and Washington, D.C., long term care workers, allies and partners issued a unified demand to Congress and President Joe Biden: Respect us. Protect us. Pay us. In Washington, D.C., a mobile truck showed a video on how home care workers are fighting to make it easier to join a union to change the future of long term care, and screened thousands of signatures urging Congress and Pres. Biden to create good union home care jobs and to put care at the heart of our nation’s recovery. The socially distant actions included:

Offering support for care workers on the frontlines of the pandemic, state Rep. Maurice West, D-Ill., shared with the Rockford Register Star, "Never did any of us realize that we would cherish a donation of a new, clean face mask, or a face shield being a prized possession. But here we are,” West stated. “Now with a glimmer of hope being in front of us, I stand in solidarity with these home care and nursing home workers as we say to Congress and President Biden: 'Respect them. Protect them. Pay them.’”

SEIU International President Mary Kay Henry and Massachusetts Senator Elizabeth Warren also authored an op-ed for CNN urging Congress and the administration to honor essential care workers by making sure they get the wages, protections and respect they deserve by creating good union care jobs. While earlier in the week, several SEIU home care providers held a virtual discussion with Representative Debbie Dingle (D-Mich)—a leading champion on transforming long-term care.. They talked about the invisible care crisis and the need for greater investment in the care economy.

As part of the day of action, #MyHomeCareStory was launched for workers, families and consumers of care to share their own story on why #CareisEssential. In one day alone, 253 stories have been collected.