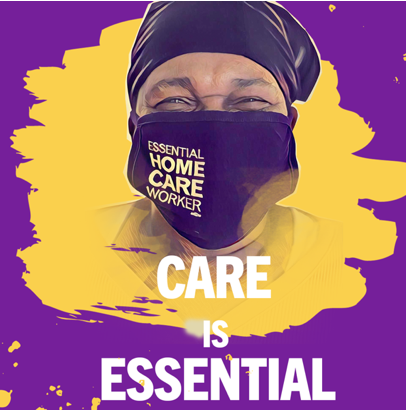 SEIU home care workers recently joined Vice President Kamala Harris, Speaker of the House Nancy Pelosi and other champions and celebrities in the #CareCantWait Summit. These workers shared their stories and called on elected officials to invest in our nation’s care infrastructure through President Joe Biden’s proposed $400 billion investment  in home and community services.

“For me, caregiving is so much more than a job,” said Alyssa Evans, a home care worker of 10 years and a member of SEIU Local 775. “When I go in and I work with people I’ve been assigned to or taken on, they become so much more than just clients. They are an extension of my family.”

“We know that there are deep cracks in our care infrastructure,” said April Verret, president of SEIU Local 2015 and chair of the National SEIU Home Care Council. “Over two million caregivers lost their jobs in the last year — more than 600 thousand of them black women; more than 615 thousand of them latina women, and 32 percent of them between the ages of 25-34. They left the workforce because they lacked child care. We have lost a generation of economic gain.”

Several days later, the home care workers spearheaded a nationwide call-in day, where people across the country called their members of congress, urging them to pass the President’s plan—which would be a game changer for economic equality by creating up to a million good-paying union home care jobs.