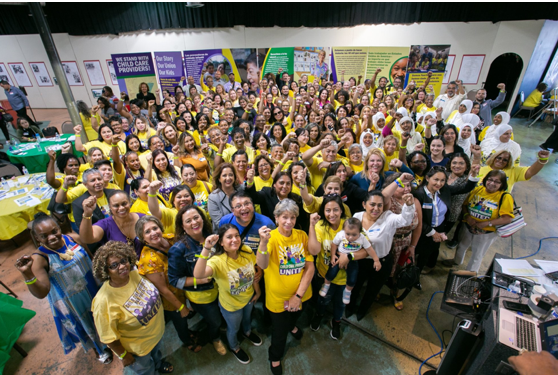 Child Care Providers United (CCPU), California’s union representing 40,000 family child care providers, announced on Friday, June 25 a history-making first contract with the State of California that includes significant rate increases for the workforce providing early learning and expands access to care for working parents. The victory was led by the Black and Brown women who serve as the backbone of California’s care infrastructure and economy and comes after more than a year of intense action: thousands of phone calls to legislators and the Governor; car caravans and protests outside of state offices; and day-long trips to the state Capitol to fight for this historic agreement.

“I couldn’t be more proud to be a second generation child care provider and to win this long fight for better rates and dignity for my union siblings and providers like my mother, who helped me see that by joining our voices together collectively, we could create a brighter future for both California’s child care providers and young learners,” said Miren Algorri, a San Diego child care provider.