Big Win for Window Washers with Essential Workers Sticking Together! 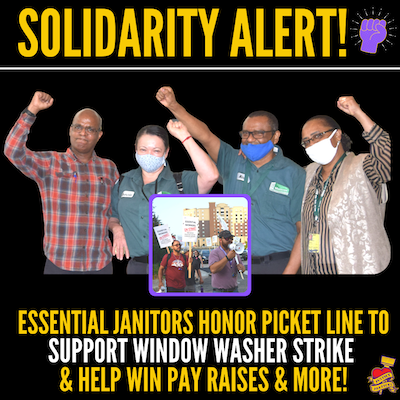 The window washers were not alone as they marched outside high rises in downtown Minneapolis, St Paul and MSP Airport. On week two of their ULP strike, as they set up picket lines at the MSP Airport, they were joined by dozens of essential janitors who refused to cross the picket line. The mostly East African women janitors used the power of their union contract to honor the picket line and sacrificed a day’s pay to support window cleaners in their fight for better safety protections. It was a huge boost to morale for the workers as they entered the critical second week of their strike.

"I'm so proud we exercised our rights. When we honored the picket line, we felt powerful and united. We stood up for the window washers and they won, so we're happy," said Janitor Ahmed Kahsay.

The new union contract includes wins like a 12% wage increase over the duration of contract — making these cleaners among the highest paid in the U.S. — more paid sick days, increased Disability Pay, and the historic creation of an apprentice Safety Training Program that will change their industry.

When asked about the victory and the support of essential janitors, Window Washer Eric Crone said:

“Our strike showed that no one will just give anything to us, but you have to stand up and fight for what you deserve. I hope our strike, and our strong new contract, show other essential workers that when you band together and stay the course, you can get results."