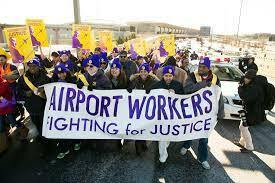 Airports workers scored another big victory towards safe airports last week after Mayor Jim Kenney signed into law the bill raising the wage floor at the Philadelphia International Airport to $15.60/hour and ensuring a $4.54 hourly wage supplement for health insurance. The law also provides up to 56 hours of paid sick leave.

"The new PHL Prevailing Wage Law will not only make sure that the workers make a living wage but will assure they have meaningful access to health benefits," said  Councilmember Kenyatta Johnson, the bill's primary sponsor. “The airport is one of the biggest and most profitable airports in the country, and the workers — many of whom make less than $30,000 a year in salary — shouldn’t have to worry that they could be bankrupted at any time by an illness or injury."

This legislative victory recognizes the health risks airport workers face every day and brings justice a step closer to our airports.